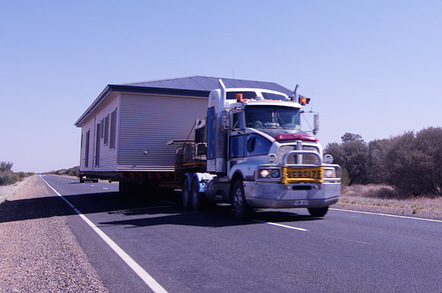 Chip designer Qualcomm has sold off the product which made its name; the OmniTRACS vehicle-tracking platform which has been keeping truckers on the leash for 25 years.

The service was launched by newly founded Qualcomm back in 1988, as a text-based notification system using a roof-mounted directional antenna, but now will exist as a stand-alone operation backed with private equity.

We might know Qualcomm for its ARM-based Snapdragon processors, which beat in the heart of every other smartphone, or perhaps for owning half the patents on mobile telephony, or (if we're way too old) for owning the last decent email client, Eudora, but to many the company is synonymous with the spy in the cab.

"Qualcomm getting out of the electronic logging device business is like Kleenex no longer making, well, Kleenex," one attendee at the Great American Truck Show told Overdrive magazine, and there's some truth in that given how OmniTRACS pioneered mobile telecommunications.

Connecting truck drivers to their dispatch, even with a text-only channel, was not only profitable but gave Qualcomm the experience to develop cellular system architecture CDMA (code division multiple access) for terrestrial communications, enabling the US to have a mobile phone system – albeit one that was incompatible with the rest of the world for a decade or so.

CDMA is also part of W-CDMA (Wideband Code Division Multiplex Architecture) which has been adopted globally, ensuring that Qualcomm made more money from licensing its 3G patents than from tracking truck drivers, thus pushing the company further into silicon and away from logistics.

Qualcomm dropped a lot of money on Globalstar, one of the ill-fated satellite phone systems which went bankrupt when it became clear no one wanted satellite telephones. Qualcomm wanted the satellites for machine-to-machine networks – tracking and connecting more trucks – but the system needed voice calls to be viable.

These days Qualcomm presents itself as a silicon company, and although the company's patent portfolio remains an important source of revenue, none of that relates to trucking.

OmniTRACS will separate entirely within a year, and continue to operate under the ownership of Vista Equity Partners, which promises to leave things running much as they are – no doubt to the delight of truckers everywhere. ®