Touchscreens and vPro for all 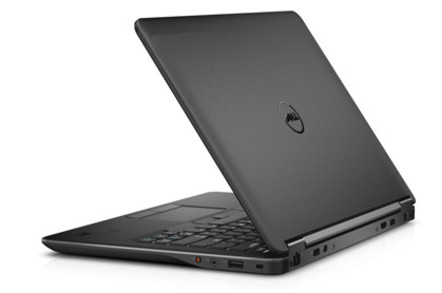 Dell is slimming down and powering up its business laptop line with three new Latitude families running Intel's latest-generation chippery, including a carbon-fiber Series 7000 Ultrabook that the company claims is the most secure in the world.

All of the new Latitude systems ship with Windows 8 or Ubuntu 12.04, and have the option of Corning Gorilla Glass touchscreens and either SSD or hybrid hard drives. They're all also toughed up with shock absorbers and hardened frames and hinges for the rough and tumble of the roadwarrior's life.

At the budget end of Dell's new lineup is the 3000 Series, which includes 14 and 15-inch laptops running on-chip graphics or an optional Radeon card. These go on sale on September 12 for $599 at the most basic configuration, and are targeted at the education and low-cost business user.

A little further up the scale is the 5000 Series, 14.1 and 15.6-inchers that come with options for LTE, a four, six or nine-cell battery and up to 8GB of RAM and 1TB of disk storage or a 256GB SSD. They will go on sale in October for an unspecified price.

But it's the 7000 Series that's the pick of the litter as far as Dell's concerned – 12 and 14-inch Ultrabooks with an aluminum casing and optional carbon-fiber lid. At a tenth of an ounce under 3lb (1.3kg) and 20mm thin the Ultrabooks are highly portable, but come with a healthy selection of ports – three USB 3.0 and Ethernet – and meet military-standard toughness tests.

"These exciting new additions to the Latitude line provide our commercial customers with what they've been asking for by bringing touch capability to the workspace at desirable price points," said Kirk Schell, VP of Dell's commercial computing group, in an emailed statement.

Dell has also built hefty security technology into the Ultrabook using Intel's vPro control technology, including a custom biometric login system, remote BIOS management, and full data-wipe if the computer goes walkabout. Jason Kennedy, director of vPro product management at Intel said that this was just the first of a number of big vPro rollouts that will be announced over the coming months.

"Intel's been very public about being aggressive in the mobile space, including tablets, and you should expect some more announcements about new capabilities," he told The Register. "Dell has been a fantastic partner and should earn credit for some to the specific vPro extensions that we've collaborated with them on."

Intel is planning on getting vPro into many different device types as the processing power becomes available to use it properly, ranging from fondleslabs to all-in-one systems. More details are expected at this year's Intel Developers Conference held next month in San Francisco, and Kennedy said support for vPro "had never been higher". ®