Microsoft: YES Windows 8.1 is finished, but NO you can't have it

It's for hardware partners only for eight more weeks 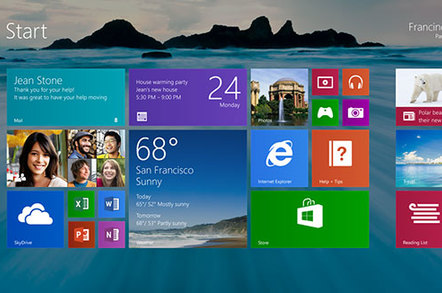 Microsoft says it has already begun seeding the final code of Windows 8.1 to its manufacturing partners, but that doesn't mean you'll be able to get your hands on the update any sooner.

In a blog post on Tuesday, Windows corporate VP Antoine Leblond said that while hardware makers are being given time to incorporate Windows 8.1 support into their latest devices, the public release date for the Windows 8.1 update remains October 18.

"In the past, the release to manufacturing (RTM) milestone traditionally meant that the software was ready for broader customer use," Leblond wrote. "However, it's clear that times have changed, with shifts to greater mobility and touch as well as the blurring of work and personal lives."

In other words, just because Microsoft says its work on Windows 8.1 is done doesn't mean the new version will install on every device without a hitch.

Leblond said that the first new devices to ship with Windows 8.1 preinstalled will begin arriving later this fall, "just in time for the holidays" and just about one year after Windows 8 launched in October 2012.

He stressed, however, that except for manufacturers, nobody should expect to have access to the update before the official October launch date – not developers, not volume licensing customers, not TechNet or MSDN subscribers; nobody.

Naturally, no sooner had Redmond made its announcement than some astute observers reported seeing a leaked copy of the RTM online. Here at El Reg, however, we strongly advise avoiding any such unauthorized downloads unless you're very sure of your source.

If you just want a taste of Windows 8.1's new features, the public preview version of the update has been available via the Windows Store since June, and Microsoft quietly slipped out a second preview targeting enterprise customers in July.

While developers wait for the final code to arrive, Microsoft has also posted some tips to help them update their Windows Store apps to work with the Windows 8.1 Preview (and presumably the final version when it ships).

Eager Reg readers should be aware, however, that the Windows 8.1 Preview release will not be compatible with the final version when it ships. Users who install the Preview will be able to upgrade to the final code via the Windows Store, but they will also need to reinstall all of their applications, including desktop applications. If that's too much of a hassle for you, you'll want to hold off upgrading until October 18. ®