Pulsars: the GPS beacons of the cosmos

Mars is here – down to the metre 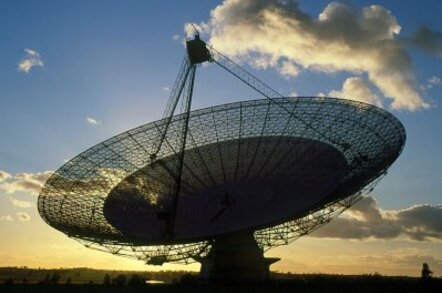 Want to navigate over huge distances with nearly superhuman accuracy? All you need is a laptop, the right software, and some way to keep track of the signals of distant pulsars.

What began as an attempt to improve the search for gravitational waves has had the unexpected secondary outcome of demonstrating that pulsars could just as easily become a platform for interplanetary navigation. And while the astronomers behind the project don't anticipate humans setting off for Alpha Centauri any time soon, they believe their modern version of “navigating by the stars” would be accurate enough to keep track over interstellar distances.

CSIRO Astronomy and Space Sciences research scientist Dr George Hobbs explains that the navigational possibilities arose out of work to refine TEMPO2, software that's used in the analysis of pulsars.

Pulsars should be able to help test the theory behind gravitational waves, he explains, because they provide a “timing pulse” that should make a gravitational wave from cataclysmic events (an exploding galaxy a galactic-size explosion* for example) detectable. But only on condition that you're certain you can eliminate every other possible explanation of an apparently mis-phased pulse.

But only if they can be characterised with fanatical precision, down into the nanosecond level, and all possible sources of error (whether it's errors in the clocks that time-stamp the signal, wobbles in the pulsar's rotation, errors in the telescope, and so on).

That's where TEMPO2 comes in: created by Hobbs in collaboration with RT Edwards and RN Manchester, it takes work begun in the 1970s (the original TEMPO) and updated it for the gravitational-wave hunt – and incidentally created a reference point suitable for solar system navigation.

That provided a “Eureka!” moment for X P Deng, a Chinese student working with CSIRO, who figured out that with such an accurate way to measure the centre of mass of the solar system, the same technique could be applied to spacecraft. His paper is at Arxiv, here.

A spacecraft travelling between Earth and Mars, for example, would only need a way to observe pulsars (“An on-board x-ray telescope would work well”, Dr Hobbs said), and enough processing power to run TEMPO2, and “you could identify where you are, anywhere in the Galaxy”, he told The Register.

And how much grunt is needed to run TEMPO2? “It's free software that I can run on my Mac laptop with no worries at all,” he said. ®

*Bootnote: All right, all right. Here we are looking at the universe and an author can get pedantry over one poorly-phrased sentence. I've corrected it. RC. ®