Who's on bottom? Surprisingly, it's not Internet Explorer 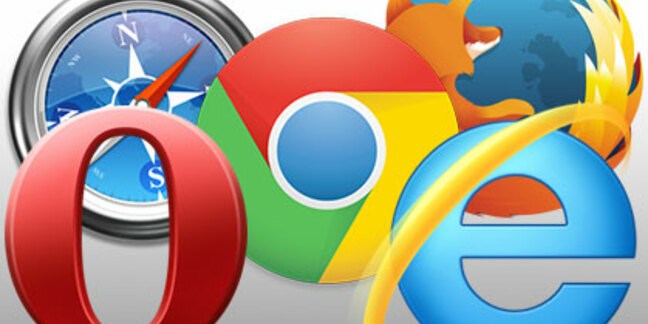 Web app testing-as-a-service company Sauce Labs has released its latest browser crash data, and remarkably enough, the least stable web browser today probably isn't the one you think it is.

True, by this metric as by most others, Internet Explorer 6 is the worst browser out there. It topped the crash rankings in Sauce Labs' report with a 0.31 per cent error rate.

What's more, IE stood out as the least stable web browser overall, based on the average error rates of all IE versions combined. Its average error rate was 0.25 per cent, compared to a rate of between 0.11 per cent and 0.15 per cent for all of the other browsers tested.

But those are just the average rates, going back to browser versions as old as IE 6 and Firefox 3.5. Each successive version of IE has been more stable than the last, to the point that IE 10 now boasts an error rate of just 0.05 per cent – more than six times better than IE6, and far better than the average error rate for all versions of any single browser, including Chrome and Firefox. 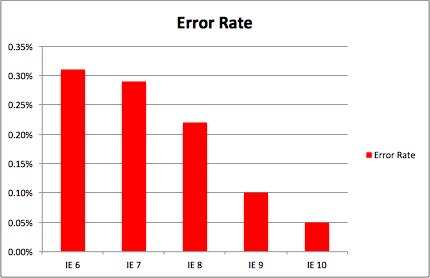 Getting better all the time: Microsoft has come a long way since IE 6 (source: Sauce Labs)

But Firefox and Chrome have been improving rapidly, too. As Sauce Labs observes, "Most versions of Chrome have error rates low enough that they didn't show up on the [comprehensive] graph. Neither do later versions of Firefox."

Things get interesting, however, when you look at the graph of the error rates for just the latest versions of the browsers tested. Here, Firefox 22 really shines, with an error rate so low that it doesn't chart at all. Chrome 27 comes second with an error rate of about 0.015 per cent, and next is IE 10 with its 0.05 per cent rate – not bad at all, really.

So which browsers could use improvement? Opera 12 didn't do so well on Sauce Labs' tests by modern standards, with an error rate of 0.08 per cent. That puts it somewhere in IE 9 territory, as far as stability.

But the weakest link of all, as it turns out, was Safari 6, with an error rate of 0.12 per cent. That places the stability of Apple's browser somewhere between that of IE 8 and IE 9 – that is, you could say it's about as stable as Microsoft's browser was in 2010. 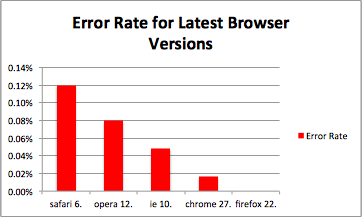 Firefox is doing fine, but it looks like Apple could learn from Microsoft (source: Sauce Labs)

Sauce Labs gathers its data by recording every time a browser crashes during one of its automated test jobs. It claims it has run 55 million tests so far (and counting), and its compiled results only include browsers against which it has run at least 1,000 tests, so its sample is fairly large.

Of course, crash frequency isn't the only way to judge a browser. For many web developers, standards compliance, performance, and rendering quality will be just as important, if not more so.

Still, it's interesting to observe that Safari – a browser based on WebKit – is significantly less stable than Chrome, which until recently was based on the same web-rendering code.

And it's definitely encouraging to see the slow but steady improvement of IE. Microsoft has rightly been criticized over the years for delivering a browser that was consistently unstable, performed poorly, and failed to comply with web standards.

Microsoft has aggressively been marketing IE 10 (and now, IE 11) as a modern, reliable browser that bucks these trends. As Sauce Labs says, "The data we have on browser error rates suggests their claims may have quite a bit of merit." ®