All the water basically got dumped on Australia, say boffins 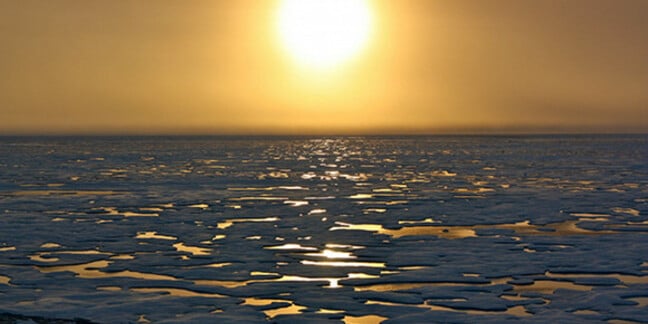 Global warming and climate change are usually thought to mean that world sea levels will rise, perhaps disastrously. But according to US government boffins, in recent times (2010 and 2011, to be precise) phenomena driven by human carbon emissions have actually caused world sea levels to fall.

The seas have, of course, been rising steadily as the climate has changed for thousands of years, ever since the end of the last ice age. During the 20th century, according to estimates mostly from erratic tide gauges, sea levels rose by around 1.7mm a year. Since the early 1990s, satellites have also been used to measure sea levels, and by contrast have suggested a steady unchanging rise of about 3mm annually - that is, until 2010.

According to a statement issued yesterday by the US National Science Foundation:

For an 18-month period beginning in 2010, the oceans mysteriously dropped by about seven millimeters.

This is pretty wacky, as warming ocean temperatures ought to mean that the oceans expand. Furthermore, there's no disagreement about the fact that the world's ice sheets and glaciers have been steadily melting for a long time - otherwise Europe would still be covered in ice. And there's no reason they'd suddenly stop melting. So how could sea levels actually go down?

In short, it's probably human-caused climate change that did it: specifically the Australian flooding of 2010 and 2011, which is generally thought by climate scientists to be at least partly attributable to rising atmospheric carbon levels caused by human fossil-fuel burning.

"It's a beautiful illustration of how complicated our climate system is," says John Fasullo of the US National Center for Atmospheric Research.

"The smallest continent in the world can affect sea level worldwide."

Australia's dry Outback interior, being ringed to a large extent by coastal mountains, doesn't tend to let go of any rain once it's got some: and in 2010 and 2011, huge amounts of rain fell there. Essentially, an awful lot of the world's oceans turned into clouds and then fell on Australia - and stayed there.

The NSF boffins explain how this came about:

Using a combination of satellite instruments and other tools, the new study finds that the picture in 2010-11 was uniquely complex.

In addition to La Nina, a rare combination of two other semi-cyclic climate modes came together. They drove such large amounts of rain over Australia that the continent received almost one foot (300 millimeters) of rain more than average.

The initial effects of La Niña were to cool surface waters in the eastern Pacific Ocean and push moisture to the west.

A climate pattern known as the Southern Annular Mode then coaxed the moisture into Australia's interior, causing widespread flooding across the continent.

These influences spurred one of the wettest periods in Australia's recorded history.

As for what could have caused such a unique and powerful combination of events, most climatologists - while stressing that unusual things do happen - indicated at the time that the devastating Aussie floods were at least in part down to humanity's carbon emissions, and that it is important to reduce these emissions in order to prevent such happenings. As Australian government Climate Commissioner Will Steffen said after the floods:

The quintessential Australian climatic pattern of intense droughts and flooding rains will still be with us in the future. But the added risks associated with climate change make it even more important that we plan and act on a careful analysis of the risks that climate variability and climate change together bring.

The magnitude of these risks ultimately depends on the effectiveness of global emission reduction efforts, including by Australia. The transition to a clean energy economy, which is gathering speed in many parts of the world, gives us great hope that we can minimise these potential risks.

Obviously Australians won't care to find themselves under water just so that the rest of the world won't be. But for other countries, who are constantly warned of the danger from rising sea levels, it would seem that the 2010-11 climate events were actually a good thing, holding back the waters for them (if only temporarily).

That said, it appears that the world's oceans jumping into the sky and coming down on the Lucky Country may just be one of those things that happens from time to time. Fasullo thinks that a similar set of phenomena may have been seen back in 1973-74, but as today's elaborate climate satellites were not then in space then he can't be sure.

Fasullo and his colleagues' research is due to be published next month in the journal Geophysical Research Letters. ®