'BLING BLING, BLING BLING' 'Hello, yes, my iPhone is made of GOLD' 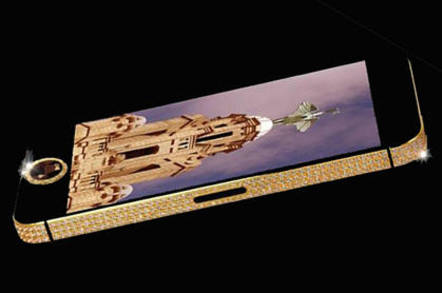 The Apple rumour mill is approaching lightspeed, fuelled by a growing number of insiders talking up a C-3PO-like gold iPhone 5S.

Today's iOS mobes are only available in black and white, but more and more anonymous sources are piling in online to claim the next-generation model - due out on 10 September - will sport an optional champagne-coloured case.

Rene Ritchie of fanboi blog iMore joined the chorus of gold gossip - and drew upon the Star Wars movie franchise, insisting that Apple will tout a "Threepio Gold to add to the existing Vader Black and Storm Trooper White lineup".

"There are a bunch of rumours and speculation making the rounds about Apple adding gold to the colour options for the upcoming iPhone 5S. I've heard the same thing, but probably from different sources," he wrote.

Demand is apparently high for a new and more exciting version of the iPhone, particularly as the last model, the 5, was widely criticised for being, well, a wee bit boring. The Far Eastern market is also likely to wolf down a gold phone, we're told.

And it's claimed the process of anodising an iPhone to turn it gold is actually quite simple, taking less time than the process required to turn it black.

Tech blogger MG Siegler added that several sources had also told him about the new colour, which he claimed would not be quite as gaudy as it sounds.

If the 5S is treated to a golden makeover, it will not be the first blinged-up iPhone: there are loads of firms touting custom cases and offering gold-plating services to fans. One hopeful on TV's Dragons' Den even persuaded James Kahn to fund his own mobe blingifying venture, Gold Genie.

So what would Steve Jobs have said? Well, seeing as he presided over a range of iMacs with more colours than a packet of Opal Fruits (or Starburst), he may have approved.

It will be accompanied by iOS 7, which which features a creepy system for tracking punters' every footstep and a new "flat" design scheme that replaces the skeuomorphism of the past with brightly coloured icons. It is also expected to have some kind of fingerprint-scanning ability - if the rumour mill's predictions are correct. ®