Only to be used in case of emergency arrest, natch 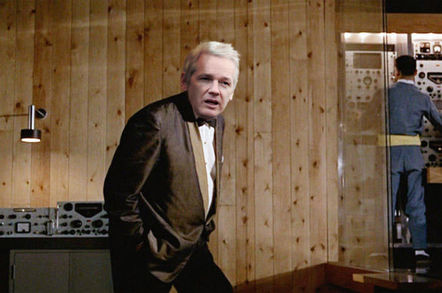 WikiLeaks has released a massive encrypted cache of documents as an “insurance policy” to be opened if its leaders come to harm.

Julian Assange's rebel army published torrent links to about 400GB of data on its Facebook page, but have not yet explained how to access the files containing the sensitive material.

It is likely that the cache of data is a warning to anyone seeking to nobble either Julian Assange or Edward Snowden.

Time reporter Michael Grunwald recently tweeted (the tweet has since been deleted) that he "can't wait to write a defense of the drone strike that takes out" Assange - although any attack on the Ecuadorian embassy in central London would be extremely controversial, to say the least.

Snowden is also wanted by the US, although he is currently holed up in Russia, where he has been offered asylum on the condition he stops leaking sensitive material.

The release may also be intended as a shot across America's bows ahead of the sentencing of Bradley Manning, who faces up to 90 years in prison for his role in helping WikiLeaks release a huge amount of classified material

Manning is a US soldier who was arrested in 2010 and then admitted to leaking some 250,000 US diplomatic cables, as well as about 470,000 documents relating to the United States involvement in wars in Afghanistan and Iraq, to WikiLeaks.

It is the sheer size of the latest leak has got the internet's attention, with dozens of coloured hat-wearers determinedly working to crack the encryption. Whatever WikiLeaks is packing here, it's certainly very large. The organisation's top brass and their allies will be hoping that it's large enough to keep them safe.

In the ancient world, such a tactic was known as a Parthian Shot, after the ancient Persian army's tactic of feigning retreat and then launching a volley of arrows. Although, as the world doesn't know how sharp Assange's arrows are, the effectiveness of the tactic has yet to be proved here. ®