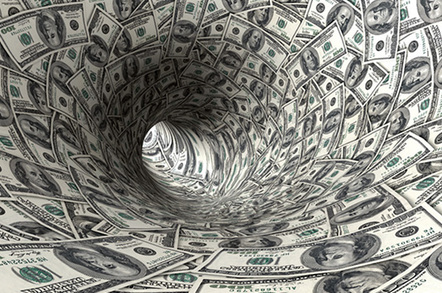 One of Dell’s biggest shareholders has dumped almost half its holdings in Big Mike’s computer outfit.

Southeastern Asset Management is reported to have sold 41 per cent of its Dell stock, reducing the value of its holdings to $949m.

Southeastern had held 8.4 per cent of Dell, making it the biggest stockholder apart from Michael Dell.

There’s no word on why Southeastern sold, but the news should be seen as significant.

Southeastern had been teaming up with Carl Icahn - who has just poured $1.5bn into Apple - to buy out Michael Dell and keep the PC and server company public.

The fund had opposed the proposed $24.4bn takeover of Dell by the company's founder, Silver Lake Partners, Microsoft and a slew of banks.

By early July, Team Dell had made it clear they were not going to offer shareholders any more money to take the company private.

They’d proposed $13.65 per share, while Icahn and Southeastern had offered $14. Shareholders were expected to vote on the deal on 18 July, which was then postponed to 24 July and finally set for 12 September, the fourth time the vote has been scheduled.

Icahn has since sued the Dell board for changing voting requirements.

Southeastern is a shrewd mover and selling half the stock suggests the company either knows something or is taking a fatalist line about its prospects for success.

It was Southeastern that upped its stake in Sun Microsystems to 21.6 per cent in October 2008, and then leveraged its position to get its own reps on the board.

From that point, Southeastern manoeuvred to get Sun sold – to Oracle.

At the time, Southeastern said it had wanted to have Sun's "true economic value realised". The end result was a sale to Oracle in 2010 for $7.4bn.

With Southeastern relinquishing half its leverage in Dell, it would seem the investor senses its Dell bid can go no further. ®

AGM X3: Swoon at this rugged interloper mobe then throw it on the floor to impress your mates

Hands On Because it'll be fiiiiine... probably