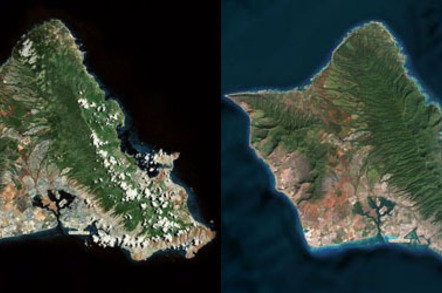 America's National Academy of Sciences has called on the US government to guarantee the future of the country's venerable Landsat missions amid uncertainty engendered by the country's slow-motion budgetary train wreck.

The Landsat program began in 1972 with the launch of the Earth Resources Technology Satellite (later Landsat 1), and had its eighth-generation launch in February 2013. There are now fears for the future of Landsat.

Landsat and Beyond was authored by the Committee on Implementation of a Sustained Land Imaging Program, comprising the Space Studies Board, Division on Engineering and Physical Sciences, and the National Research Council.

It states that the “economic, intrinsic and scientific benefits to the United States of Landsat imagery far exceed the investment in the system.”

In addition, the committee, chaired by Jeff Dozier of UC Santa Barbara, warned that America's earth survey resources are under challenge: “other nations are now developing systems whose capability rivals or exceeds US systems,” the report states.

According to Space News, NASA has been considering options for Landsat other than a dedicated Earth imaging spacecraft, such as hosted payloads. The cash-challenged space agency of a cash-challenged government has also been exploring international partnerships as an option to continue the program.

The NRC report calls for a “systematic and deliberate” program to prevent any disruption of the Landsat program.

The report is available for purchase at the NAS (abstract here). ®