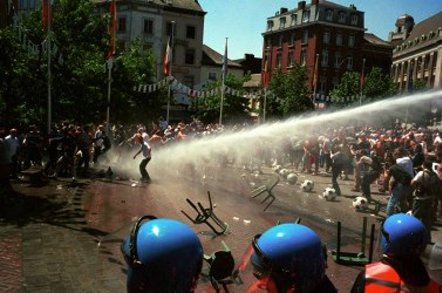 LG has cancelled a series of publicity stunts promoting its new G2 smartphone after 20 Korean consumers were hurt as they attempted to get a free handset.

The PR boffins at LG decided it would be a good idea to release 100 helium-filled balloons, each carrying a voucher entitling the recipient to claim their 950,000 won ($852.54) smartphone. It then took to social media to promote the event, inviting people to witness the balloons' release and encouraging them to grab one of the vouchers.

But what must have sounded like a good idea in the marketing meeting quickly dissolved into chaos. People aren’t stupid. They figured out that the only way to get the voucher was to burst the balloons, and they showed up equipped to do so with BB guns, knives on sticks, and other tools.

When the balloons were released, the crowd surged for them, and some participants fired BB guns into the air to try and pop their targets. Korea Times reports that in the ensuing scrum, 20 people were injured.

“Some were using BB guns to shoot the balloons. As far as I know, there were only some 20 security guards. LG should have placed more security personnel as the event was already promoted via social networks such as Facebook, Twitter and leading local portals. Some of the injured were hospitalized,” a blogger who was in the crowd wrote.

LG told the paper that it had had difficulty in controlling the crowd of frenzied bargain-seekers and would be fully compensating those injured in the scrum. It is also cancelling similar events planned for the future.

As PR stunts go, this is one of the most ill-thought-out we've heard of in recent years, but at least no one died. It has happened before.

Back in 2007, when Nintendo's Wii was the current object of techno-lust, US radio station KDND promised listeners a free console for whoever could drink the most water on-air. The contest, entitled "Hold Your Wee for a Wii," resulted in the death of the winner from water intoxication.

Thankfully LG's event didn't go that far awry, but El Reg suspects someone in marketing is looking for a new job, nevertheless. ®