Apple: Of course we stalk your EVERY move. iOS 7 has a new map to prove it

Cupertino knows where you were last summer – it's a feature 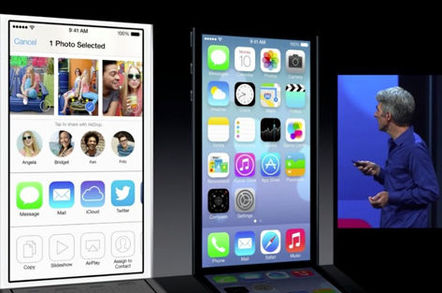 The latest beta of Apple's new iOS 7 for iThings features a "Frequent Locations" map, showing where fanbois have been hanging out lately for those too hip to remember the happening joints.

The feature is buried deep in the privacy settings, but if one has Location Services enabled it shows a map recording all the places where the user has been spending their time, helpfully overlaid with circles shaded to indicate just how popular that location is with that user.

We all know Apple, and Google, track our every move for our own benefit (how else would we learn about the valuable services nearby?) but the map software serves as a reminder of just how much data is being gathered.

Indeed, Apple admits in its iOS documentation: "If Location Services is on, your device will periodically send the geo-tagged locations of nearby Wi-Fi hotspots and cell towers in an anonymous and encrypted form to Apple, to augment Apple's crowd-sourced database of Wi-Fi hotspot and cell tower locations."

And now, the Cupertino giant has confirmed that the new track'n'map feature will be in the final release of iOS 7, expected in September, and provided this less-than-reassuring disclaimer:

"If you choose to enable Improve Maps, Apple will collect the GPS coordinates obtained through the Frequent Locations feature on your device and correlate them with the street address associated with your Apple ID. This will enable Apple to better approximate the geographic location of that and other addresses. Apple will only retain the resulting coordinates in an anonymous form to improve Maps and other Apple location-based products and services. You can turn off Improve Maps or Frequent Locations at any time under Settings -> Privacy -> Location Services -> System Services -> Frequent Locations."

Switching off Location Services is an option on all handsets, though Android (specifically the Google app suite) gets pretty unhappy if it's left off for long (reminding one how much better the experience would be if tracking were switched on).

Even if the GPS is off we're still being tracked by our phone network operator, as this still-marvellous example from Germany's T-Mobile shows us. Apple's honest approach should probably be welcomed even if it provides another good reason to key-lock one's iPhone to prevent friends and colleagues from gathering blackmail material. ®