Cramming 10 pounds of data center into a 5 pound bag 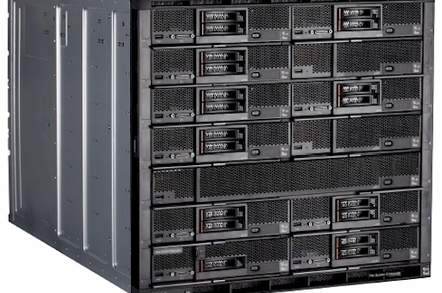 Big Blue is hoping to compete better with the very dense blade and modular server designs available from HP, Dell, Silicon Graphics, Super Micro, and a few others with a new twin Flex System node that sandwiches two servers into a single slot.

In addition, IBM is rolling out new Power7+ nodes for the Flex System, addressing the modest processing needs of customers using its proprietary IBM i operating system – those who need more oomph in a two-socket node – and finally getting a four-socket node out the door using its latest eight-core Power chip.

The new Flex x222 server node is conceptually similar to the "Gemini" ICE X servers announced for the Xeon E5 processors back in the fall of 2011, four months ahead of the rollout of Intel's Xeon E5-2600 processors.

The SGI twin blades, which are also half-width server nodes like IBM's Flex x222, have both air-cooled and water-cooled options and can use 95 watt or 135 watt parts in the Xeon E5-2600 family of chips, which came out in March 2012. IBM's Flex x222 nodes are just air-cooled, and for the moment are using only the low-priced and lower-powered Xeon E5-2400 processors, which came out in May 2012.

The E5-2600s have two QuickPath Interconnect links between the two processors in a system board, and four memory channels per socket and three memory sticks per channel, while the E5-2400s have one QPI link between the sockets and only three memory channels per socket and two memory sticks per channel. One is a workhorse meant to pull a plow and the other is a trotter meant to pull a coach. (That makes the Xeon E7 a Belgian drafthorse, by analogy.)

Jeff Howard, vice president of marketing for the Flex System line at IBM, tells El Reg that IBM went with the Xeon E5-2400 to chase cloud, virtual desktop infrastructure, and HPC workloads where customers are as sensitive to price as they are to performance.

Each of the individual nodes on the Flex x222 has a dozen memory slots, which are positioned such that they interleave when the hinge on the device is closed. Each server node in the module can support low-profile DDR3 memory sticks in 2GB, 4GB, 16GB, and 32GB capacities, for a maximum of 384GB per node.

Each node also has two 10Gb/sec Ethernet ports, which come off of a shared I/O connector that plugs into the midplane of the Flex Chassis through the lower server in the sandwich. There is another shared I/O connector that can be used to add an InfiniBand or Fibre Channel mezzanine card that can link to the top and bottom server and be shared by the two server nodes in the enclosure. 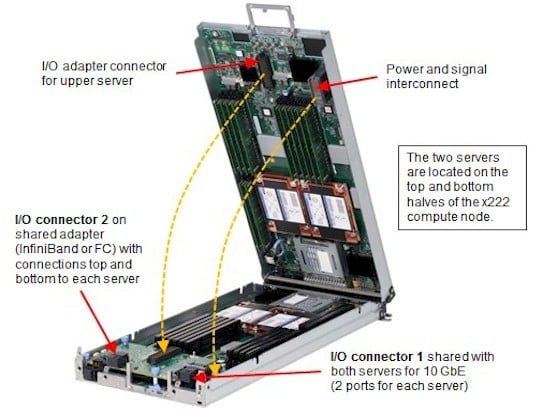 The open-hinge view of the Flex x222 server node

The Flex x222 has room for only one 2.5-inch disk drive, which is the only drawback to the sandwiched design compared with a regular two-socket Flex x220 node. You can, however, buy a conversion kit and cram two 1.8-inch solid state drives into that single disk bay on each server node, and then mirror the units for high availability. IBM is offering the 1.8-inch SATA SSDs in 100GB and 200GB capacities. The 2.5-inch bays in the unit can be fitted with 500GB or 1TB SATA disks spinning at 7.2K RPM or 128GB or 256GB SATA SSDs.

The number of Flex x222 nodes that a Flex System chassis can house depends on the number and strength of the power supplies in the chassis and how they are configured for redundancy. If you have six power supplies rated at either 2,100 or 2,500 watts, you can load up 14 enclosures for a total of 28 nodes in the 10U rack-mounted chassis. And if you are running VDI workloads pumping out virtualized Windows 7 images, then four of these Flex Systems with 28 nodes can drive up to 2,800 individual PC images.

The Flex x220 server node can support Microsoft's Windows Server 2008 R2 and 2012, Red Hat's Enterprise Linux 5 and 6, and SUSE Linux's Enterprise Server 10 and 11. As for hypervisors, VMware's ESXi 4.1, 5.0, and 5.1 are currently certified, but there is probably no reason why KVM or Hyper-V can be put on these machines.

The Flex x222 will be available on September 10, just in time for the fourth-quarter push and perhaps just in time for Intel to get "Ivy Bridge-EP" Xeon E5 processors out the door. Intel has still not said when it will launch these kickers to the Sandy Bridge chips, except that they would launch in the third quarter. That pretty much leaves August and September at this point.

Next page: Three new Power nodes for a diversity of users
Page:
Tips and corrections