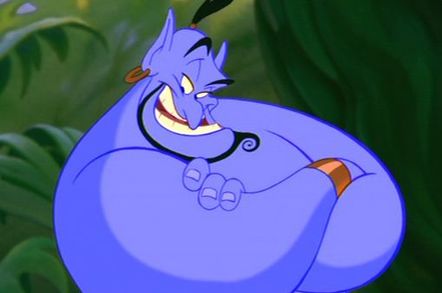 Startup database company GenieDB has announced a cloud-hosted database named – we apologize in advance for what you're about to read – GenieDB Globally Distributed MySQL-as-a-Service (DBaaS).

The tongue-twisting tech was announced on Monday, and sees the company claim to have "solved the problem of geographical [data] distribution," according to chief executive Cary Breese.

"We have an eventually consistent model, we've borrowed some from the NoSQL providers out there, but what we've done is inside a MySQL package," Breese told The Reg. The technology works as a plugin for MySQL versions 5.1 to 5.6 on Linux, according to a GenieDB FAQ.

This is similar to the approach used by Google in its "NewSQL" planet-spanning database Google Spanner, though Google's technology allows for externally consistent transactions via the use of custom GPS-servers in its data centers, whereas GenieDB only allows for eventually consistent ones because it must sync globally to authorize a transaction.

"Spanner is a very similar philosophy to GenieDB," Breese says.

TransLattice is another provider that has crafted a database with geo-redundancy and global replication, but it is based on PostgresSQL, whereas GenieDB is MySQL – a feature that Breese thinks will tempt companies into the tech.

"GenieDB is now offering a fully managed DBaaS where all the developer has to do is point their application to the endpoints we give them – no installation, no managing backup/restores, no worrying about version upgrades, no DB administration whatsoever," he told us.

The database is run across multiple cloud providers, including HP and Amazon. GenieDB provisions IT gear on a cloud of a customer's choice, installs the software, then grants the customer database-level access to the gear.

"We internally have an API that we use to drive this entire infrastructure and this same API will be exposed to end-users so that they can spin up/down clusters and do other management tasks programmatically," Breese says.

One caveat is that, as this is a cloud hosted database, it's going to be of little use if data is being generated on-premise and needs to be spurted up into the cloud. In fact, the main reason people might use a DBaaS is because of a lack of database folk within the organization.

"The primary drivers for DBaaS are ease of use, cost savings, and putting all those headaches of DB administration off of your own plate so you can focus on app development," Breese says. "For millions of dollars you can build similar looking technologies on Oracle or even on MySQL. However we offer a much, much more cost-effective solution."

Prices for the tech are the base cost of the provisioned cloud resources, plus a price levied according to the size of the cloud infrastructure. Breese says prices can vary from anywhere between $15 to $1000 a month. Though this works out as being more expensive than Amazon's own relational database service, Breese thinks it's a good value because GenieDB has multi-regional failover. That is, when you sign up with the company it will encourage you to deploy in two separate Amazon regions (or even multiple clouds), so you have a "hot node" to failover to in the case of a hiccup.

Given the Cambrian Explosion that has occurred in the database market of late, stretching managed MySQL across the globe could be an evolutionary dead end, or it could be the Genie(db) that some devs have been hoping for. ®