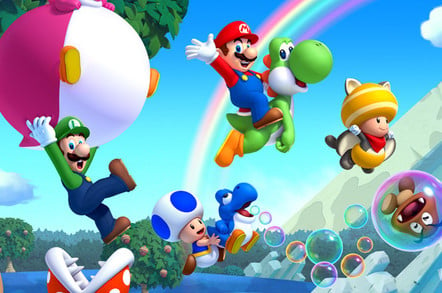 Nintendo's Wii U console continues to drag the company's fortunes down, as UK supermarket Asda pulls the machine off its shelves.

The Japanese firm said that sales of the Wii U were down 51 per cent in the last three months, as it offloaded just 160,000 units to take the total sold so far to 3.61 million consoles.

Blighty's second-largest supermarket chain said yesterday that it would stop selling the Wii U in its stores after a £100 price cut failed to help shift the console.

Asda said that the gaming machine would still be available online and denied that it was losing confidence in Nintendo, pointing out that it had recently expanded the space dedicated to the handheld 3DS XL and its games.

Nintendo's older console model, the Wii, actually outsold the new Wii U in the quarter from April to June, with 210,000 units shifted. However, the company is still expecting to sell 9 million Wii Us in the year from April to March 2014, compared to 2 million Wiis.

The two-screen Wii U has failed to capture the imagination of gamers and though the firm's handheld options continue to sell fairly well, with 1.4 million 3DS and 3DS XL sold in the quarter, Nintendo risks falling by the wayside when Microsoft's new Xbox and Sony's latest Playstation console come out in the next few months.

The company said it intends to try to buck up sales of the Wii U with the release of key titles like Wii Fit U, Donkey Kong Country: Tropical Freeze, The Legend of Zelda: The Wind Waker HD and Super Mario 3D World. Nintendo also said that it would be marketing its hardware and software through its online environment "Miiverse".

Despite the worrying Wii U sales, Nintendo reported a net profit for the quarter, helped by the weaker yen. The firm made 8.6bn yen ($88m; £58m) for the three months to June, compared with a loss of 17.2bn yen during the same time last year. ®