Wrote down more inventory charges than it took in revenue 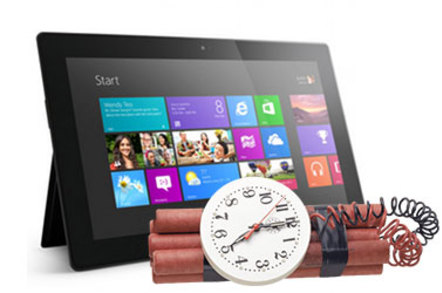 Microsoft's shares took a beating following its gloomy fiscal 2013 earnings report earlier this month, in which it wrote down nearly a billion dollars on its unloved Surface RT fondleslabs. But the software giant isn't out of the woods yet, because new details have emerged that have the full Surface picture looking even worse than was previously thought.

In Redmond's annual 10-K report to the US Securities and Exchange Commission (SEC), published on Tuesday, the software giant reported actual Surface revenue figures for the first time – and they're not good.

According to the report, Microsoft's total Surface revenue for all of fiscal 2013 amounted to just $853m. That's nearly $50m less than the $900m charge Redmond took when it discounted its remaining Surface RT inventory by $150 per box.

And that's not all. That $900m writedown was related to Surface RT only, but the $853m revenue figure includes sales of Surface RT and Surface Pro combined.

Such sluggish sales aren't likely to have covered Microsoft's costs for the Surface launch, especially when you consider the massive marketing push it gave the ill-fated devices.

Further down in its 10-K filing, Redmond reports that it upped its sales and marketing budget for the Windows Division in 2013 by a jaw-dropping $1bn, which included an $898m increase in advertising costs "associated primarily with Windows 8 and Surface."

Got that? Microsoft spent more in a single year advertising the Windows 8 and Surface launches than it took in from Surface sales that same year.

And remember, none of this was even spread over an entire calendar year. Microsoft's fiscal 2013 ended on June 30. It launched Windows 8, Windows RT, and Surface RT on October 26, 2012. The Surface Pro launch came later, in February. But whichever way you slice it, Microsoft managed to mow through an $898m marketing budget in just eight calendar months – and consumers still didn't take the bait.

It's cruel to compare the struggling Surface to Apple's iPad line, but the numbers don't lie. Apple sold 57 million iPads in the same period, meaning it could have sold them for just $15 apiece and still matched Microsoft's tablet revenue figure.

It's enough to humble even the ordinarily bullish Steve Ballmer. At a recent "rally the troops" event at the Redmond campus, Ballmer reportedly confessed, "We built a few more devices than we could sell," and "We're not selling as many Windows devices as we want to."

Those were sure to have been painful admissions, coming from a guy who has seemingly bet the farm on transforming Microsoft from a software company to one that trades in integrated devices and services.

Judging by the numbers, devices and online services remain Redmond's worst performing divisions – before Ballmer's latest reorg, that is, which did away with both groups in favor of a more nebulous corporate structure that's organized around "engineering", rather than products.

Ballmer has already hinted that a second wave of Surface slabs is in the works that will bring typical hardware upgrades. But given how poorly Microsoft's in-house hardware division has performed so far, we can't help but be reminded of what Acer CEO JT Wang said last August, when Redmond first began touting its Surface plans.

"It is not something you are good at," Wang said, "so please think twice." ®