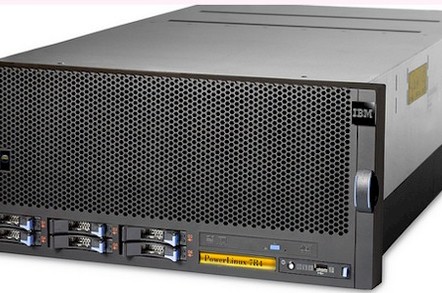 Big Blue is adding to its Linux-only Power Systems server line, including a four-socket machine based on its Power7+ processors. These PowerLinux machines have a lower cost than plain vanilla Power Systems machines that are capable of also running its AIX Unix or IBM i proprietary operating system as well as Linux.

IBM is also making promises that it will eventually offer Linux-only big iron boxes, presumably also at aggressive prices to thwart its server rivals who also have Linux aspirations, particularly for database and analytics work.

With the Unix server business crashing across all the three major players – IBM, Hewlett-Packard, and Oracle – and its proprietary IBM i operating system not generating sales like it did a decade ago, Big Blue is under pressure to ramp up sales in its Power Systems line by appealing to customers deploying workloads on Linux.

The company has offered Linux-only machines off and on over the years, and reanimated the idea in April 2012 with two-socket rack machines (the 7R2 rack and p24L modular machines) with aggressively priced memory and disk capacity and moderately better bang for the buck on processing capacity and Linux operating system licenses.

IBM added a single-socket machine (the 7R1) soon thereafter, and now it is firing up the four-socket PowerLinux 7R4 to better go after that $10bn Linux-on-x86 market that had the company rubbing its hands together in the first place.

It is a tough sell to push Power7+ chips against x86 iron, but it is not impossible given some of the advantages of the Power processor. IBM's Power chips tend to run a little hotter than roughly equivalent chips, but they have more threads and more cache per core and historically, socket for socket, a Power chip has been able to get more work done than an x86 processor.

However, because of the relatively high cost of Power Systems iron, which was marketed to Unix and proprietary customers used to paying a premium for every component in their systems, it was difficult to pitch a Power-based machine against an x86 box and win.

So, with the PowerLinux machines, IBM cut its prices to take that issue off the table. And now, IBM can focus the conversation on the performance of Java, database, and analytics workloads and show that a Power7+ alternative can take on a Xeon system and make economic as well as technical sense. 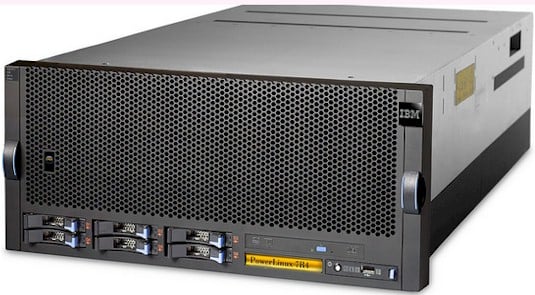 The new PowerLinux 7R4 is based on the same server chassis that is used with the Power 750+ and Power 760+ midrange machines that were announced back in February. All three machines cram two whole Power7+ processors into a single socket rather than a single eight-core Power7+ chip.

The idea is to give the midrange machine more cache and more memory controllers against a slightly smaller number of cores while also using up partially dudded Power7+ chips that have only four or six working cores.

The Power 750+ has two four-core Power7+ chips in each of its sockets, while the Power 760+ has two six-core chips. These are called dual chip modules, or DCMs, by IBM.

The PowerLinux 7R4 is based on the Power 750+ server, and thus has two four-core Power7+ chips, and they run at either 3.5GHz or 4GHz clock speeds. The machine comes with either two or four sockets loaded up, for a total of 16 or 32 cores.

Unlike regular Power Systems machines, all of the cores are activated in the PowerLinux 7R4 machine when customers acquire it; normally, you pay a base fee for the processor card and then a per-core fee to activate each processing element. The system scales up to 1TB of main memory using 16GB DDR3 memory sticks and has to be configured with at least 128GB.

The server has six PCI-Express 2.0 slots for peripherals and another of its GX++ slots to hang remote I/O drawers directly off the processor complex using a modified 20Gb/sec InfiniBand link. Those GX++ slots are important because the PowerLinux 7R4 only has six 2.5-inch drive bays for local storage.

You can slide disk or flash drives into these bays, and IBM probably could have added a lot more disks to the 5U chassis if it did not need the airflow to cool the Power7+ processors and all that main memory.

The machine comes with four Gigabit Ethernet ports and the PowerVM server virtualization hypervisor bundled into it for free. PowerVM allows for up to 20 logical partitions per core, for a total of 640 partitions maximum, on the PowerLinux 7R4 machine. 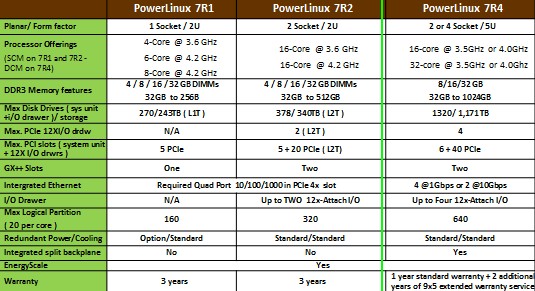 The feeds and speeds of the three rackable PowerLinux servers

The difference between the Power 750+ and the PowerLinux 7R4 comes down to the slightly different labels slapped on the front, the restriction on what operating system can run on the boxes, and the price.

As for operating systems, you can put SUSE Linux Enterprise Server 11 SP2 or higher or Red Hat Enterprise Server 6.4 or later onto the machines, and that is all. If you try to load AIX or IBM i, it won't work.

At the moment, Canonical does not support Power-based machines with its Ubuntu Server distribution, but Chuck Bryan, team leader for Linux for Power Systems, says IBM thinks about it. "Of course, Ubuntu is tempting and it certainly is popular with telcos and service providers," Bryan concedes.

But that market and IBM"s chances in it with Power-based machinery is probably not enough to tempt Canonical into formally adding support for IBM's Power Systems machines or for IBM to pay Canonical to do it. Ubuntu 4.10 through 6.10 supported Power-based machines, mostly because Apple Macs were based on Power.

From Ubuntu 7.04 onwards, Power platforms have their own distro of Ubuntu 12.10, but it is only supported via the community. The last officially supported version of Ubuntu that ran on Power-based servers was the 6.06 LTS release, and tech support ran out on this release back in 2011.

The comparison IBM wants to make is between four-socket Xeon machines and its PowerLinux 7R4, and Bryan says that as the systems get larger, the performance gap between x86 and PowerLinux gap increases. 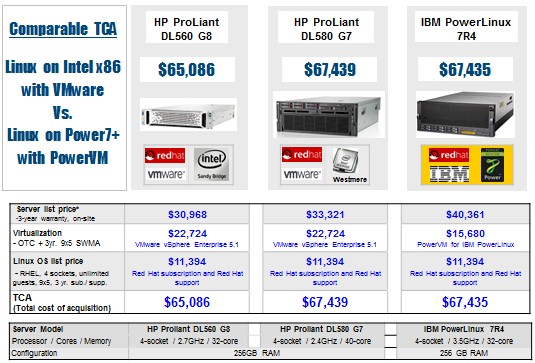 The pricing is almost identical for these machines. Based on published SPECjbb2005 Java benchmark tests and extrapolating back from 4GHz processors to the 3.5GHz chips used in the above comparison, the Power machine does about 20 per cent more work than either of the four-socket machines in the table.

Of course, Intel is getting ready to launch "Ivy Bridge-EP" Xeon E5 and "Ivy Bridge-EX" Xeon E7 processors before the end of this year, and the performance gap will no doubt close up.

In addition to focusing on peddling the PowerLinux machines to support Java workloads (including Hadoop clusters, by the way), IBM will also be pushing its own Cognos analytics software on the PowerLinux 7R4 in particular. And, just for fun and to have a run at some Oracle customers, IBM is also ratcheting up its partnership with EnterpriseDB, the commercializer of the open source PostgreSQL relational database.

"In an environment where Oracle is discounting as high as 95 per cent off their $47,500 per core, we can bring in EnterpriseDB at about half the price," says Bryan, talking about a configuration aimed at the PowerLinux 7R4.

And, says Bryan, EnterpriseDB has done a lot of work to tune up the PostgreSQL engine to take advantage of the four threads per core of the Power7 and Power7+ chips and also tweaked the database for lock contention and other issues to goose the performance of the database running on Power iron. IBM and EnterpriseDB are working on some benchmarks that pit the combination of the PowerLinux 7R4 and Postgres Plus Advanced Server database and these results should be available in the next month or so.

IBM also wants customers looking to deploy its own DB2 or Informix databases on Linux to give the PowerLinux 7R4 a looksee before deciding to kneejerk onto an x86 system or looking at Oracle's eponymous database. DB2 and Oracle are roughly equivalent in pricing for their various editions – particularly if both are involved in the deal.

The PowerLinux 7R4 server will be available on August 23.

Big Blue also issued a statement of direction in its announcement of the PowerLinux 7R4, hinting that it would offer PowerLinux-style pricing on larger Power Systems iron. Here's what it said:

"IBM intends to deliver increased flexibility to clients to exploit the performance, reliability and scale of enterprise-class Power servers to reduce the cost of managing a Linux ecosystem. IBM plans to offer IT teams new, capacity on demand options to more affordably allocate and manage system resources being deployed exclusively to support Linux on Power applications and infrastructure."

That is a pretty vague statement, but the presentation for business partners was more clear, saying that IBM would offer "dedicated Linux workload capacity" for Power 770, 780, and 795 systems at the high end of its Power Systems line. Presumably this will mean reduced processor, memory, and storage pricing for Linux-based machines and possibly for partitions that are somehow hard-coded to only run Linux. And presumably it also means that it will be available on the Power 770+ and Power 780+ systems using the newer Power7+ chips, not just on the three Power7 machines mentioned in the presentation. ®