Mysterious boffinry backer to be revealed? 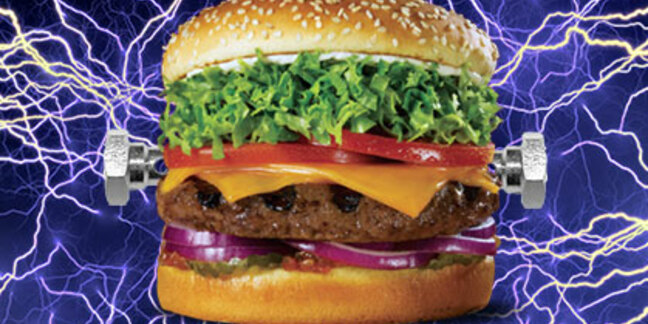 Boffins at Maastricht University, Netherlands have managed to grow synthetic beef from the stem cells of a slaughtered cow. But how does it taste?

The world will find out next Monday, when the first hamburger made from the man-made meat is cooked and served at an unnamed "exclusive west London venue," as reported by The Independent on Sunday.

According to medical physiologist Mark Post, who led the effort to produce the "in vitro" meat, the bioengineered burger will be a five-ounce affair assembled from 3,000 tiny strips of synthetic muscle, each about the size of a grain of rice.

The funding for Post's research is said to have come from an anonymous private benefactor, but rumor has it that the backer's identity may be revealed next week when he or she volunteers to be the first to taste the lab-grown meat.

Previously, Post has said he expects the patty to taste "reasonably good," though it might need a bit of salt and pepper. Future versions of the technology might involve using a biodegradable "scaffolding," added fatty tissues, and artificial blood vessels to produce thicker, more palatable cuts of meat, he said.

While this first public taste test is mostly just a publicity stunt, Post believes cultured meat will be critical to meet the world's appetite for meat in the coming years as the global human population continues to rise. Already, he said, the world is using 70 per cent of its agricultural capacity just to raise livestock for meat.

"Eventually, my vision is that you have a limited herd of donor animals which you keep in stock in the world. You basically kill animals and take all the stem cells from them, so you would still need animals for this technology," Post said.

Assuming the costs could be brought down, he said, stem cells taken from just one cow could theoretically be used to culture a million times more meat than could be butchered from a single beef carcass.

There would be environmental benefits, as well. A study by Oxford University in 2011 found that cultured meat requires 99 per cent less land and between 82 and 96 per cent less water than raising livestock, and the process would produce between 78 and 95 per cent fewer greenhouse gases.

Even the radical animal activist group PETA supports the idea. The organization has gone as far as to offer a $1m (£660,000) prize to the first person or group that can produce artificially cultured chicken meat.

Just when cultured meat might hit the market, however, is another matter. According to a spokeswoman for the UK Food Standards Agency, manmade meat would need to pass a thorough inspection and safety review process before being made available to consumers.

"Anyone seeking approval of an in vitro meat product would have to provide a dossier of evidence to show that the product is safe, nutritionally equivalent to existing meat products, and will not mislead the consumer. This would be evaluated under the EU regulation for novel foods, prior to a decision on authorization," the spokeswoman said. She added, "There have been no such applications to date." ®

The data-slurpingest, ad-slingiest exec of them all says he’s on your side

I was just fondling my slab, minding my own business and...

It helps if you ignore the odd color and funny taste

What do Zuck, Sergey, @Jack and Bezos have in common? They don't want encryption broken

But net's biggest gatekeeper not a fan of other gatekeepers...