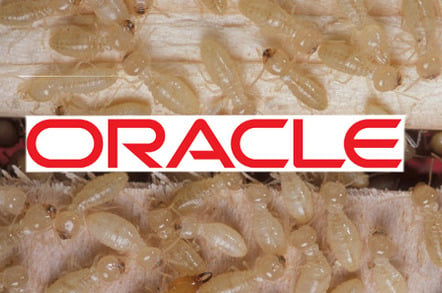 Analysis Oracle's business faces growing competition from niche technologies, but the database goliath's size means it may be blind to the threat posed by a marauding hoard of upstarts that are going after its current and future customers.

Although Oracle's customer roster includes many of largest companies in every industry you care to name, plus a big wedge of the public sector, younger companies are unfamiliar with the giant's technology, and longtime customers are looking to free themselves from Ellison & Co.'s notoriously pricey licensing.

"Over the past three years we've done in the range of 20 to 30 migrations off Oracle," Ed Boyajian, CEO of Postgres company EnterpriseDB, told The Reg. "This year we've probably done in the range of 10 or 12. We now have over 40 federal agencies who have a deployment on Postgres. Where Oracle has been a previous incumbent, the primary drivers [for migration] were price and performance."

Similarly, DataStax, a company that helps develop Cassandra, a "NoSQL" datastore based on technologies developed within Google and Facebook, has seen over 30 migrations away from Oracle, according to the company's CTO Jonathan Ellis. "The motivation is primarily scale, and secondarily we're seeing some people whose motivation is geographic redundancy and keeping data up-to-date in multiple data centers."

Upstart "NewSQL" database NuoDB reports similar figures, with the company's chief executive Barry Morris claiming the company has done "20 to 30" customers who are either transitioning away from an Oracle environment, or looking to locate new data in a non-Oracle system.

"NoSQL" leader 10Gen, which stewards the development of MongoDB, said it has moved "over 100 companies off RDBMS technologies in the past six months" according to its business development veep (and former Reg scribe) Matt Asay. Oracle's revenue share of the worldwide RDBMS market was 48.3 percent in 2012, according to the soothsayers at Gartner, so we can safely assume a significant proportion of these 100 migrations came at the expense of legacy Oracle systems.

Basho, which helps develop the open-source "NoSQL" Riak datastore, says in the past year 30 of its top 50 customers have moved away from Oracle products. "This includes both Oracle RAC and MySQL. In all cases they are moving from Relational to Riak," marketing chief Bobby Patrick tells us.

So, according to some of the leading "NewSQL" and "NoSQL" companies, over a hundred companies – presuming those polled share some clients – have adopted new cheaper or free databases to get away from Oracle. For a company like Oracle, this is insignificant given its size (market cap: $152bn) and typical earnings ($10.9bn, last quarter), but it represents what we believe is a significant shift that will become apparent in the next couple of years.

These migrations indicate that after years of development, many open source or low-cost databases have now attained performance that is either roughly equivalent to parts of Oracle, such as Postgres, or have developed capabilities that while irrelevant to much of the database market, are far in advance of any technology operated by the Red Borg, such as MongoDB or Riak or Cassandra.

"What's happening in databases is that in the big picture if you go talk to [prominent venture capitalist] Marc Andreessen about the portfolio companies in his venture firm, not one of them is using Oracle," Barry Morris CEO NuoDB says. "That's the significant point – we've got this next-generation challenge."

This challenge stems from two things: budget and technology. In the first case, many upstart technology companies are used to dealing with open source systems, and though for many of them Oracle-owned MySQL will be their introduction to the world, as their company grows they may need to turn to some of the newer free systems for storing unstructured data, such as Riak or MongoDB, than paid-for alternatives.

"Stuffing blobs, images, sensor data, and metadata in Oracle just does not make any sense," Basho's Patrick says. "If you tried to architect a highly-available system to store all of this data, the costs with Oracle are simply astronomical and even still technically challenging because of their rigid architecture."

Perceived drawbacks like this can create a generation of technical workers in companies that haven't used Oracle beyond MySQL, which could create issues when it tries to sell into them once they're larger.

There are also apparent technical challenges to running Oracle on large, distributed infrastructures without breaking the bank. Though the company has demonstrated excellent performance of its database when running on the company's proprietary Exa-systems, some contend that the company's technology functions less well when being run in a distributed, multi–data center manner due to the need for various expensive add-ons.

"They've said, 'We can run a number of databases on one big machine.' Well, okay, but that isn't the question – the question is can you run a database on a number of machines," Morris of NuoDB says. "The traditional 1980s database is predicated on a single great steam-belching server and if you want it to go faster you've got to get a bigger one. Now when you've got a server the size of a skyscraper you can't get a bigger one, and that's so contrary to the way the world is going."

This compares poorly with the current new wave of databases, which whether "NoSQL" or "NewSQL" all have an emphasis on maintaining consistency at distance without the need for expensive add-ons, with companies such as TransLattice devising clever systems to achieve this. Oracle, by comparison, tends to require the daisy-chaining of various pricey add-ons such as Oracle Golden Gate to attain the performance of some of the newer, cheaper, or free databases.

"Do we think about Oracle? Sure. Do we worry about Oracle? Not very much," 10Gen's Asay says. "Much more interesting than Oracle migrations is a whole new generation of applications for which ... 'NoSQL' databases are the optimal choice, rather than legacy RDBMS technology."

There's also a growing clamor of complaints from users that the company is charging existing customers lots of money for ongoing support, especially when these punters have bet big on its pricy engineered systems.

There's evidence for this in Oracle's most recent financial results, which failed to meet Wall Street's expectations. In the results, software licenses – a key indicator for bringing in new customers – grew a measly one percent, far below Oracle's own estimates of 11 percent growth. Revenues from license updates were up 6 per cent by comparison, indicating that existing customers are paying more.

"What's happening is partly in the way they go to market with their technologies – Exasystems – they're able to up-charge existing customers and get higher within their existing agreements," EnterpriseDB's Boyajian tells us. "We hear the other end of that, especially in the gov space –those contract practices and policies are killing federal government right now."

Similarly, Basho says a large high-tech manufacturer was increasingly "afraid" of its two Oracle servers due to fears of expensive downtime, and migrated over to Riak as a consequence.

Just as Oracle is facing trouble in the cloud with stiff competition from upstarts like Salesforce and Netsuite, the company seems to have the makings of a crisis in its heartland territory – but as with most major changes, this starts with a few scattered shifts that can quickly turn into a thunderous en mass migration. But can Oracle read this signal in the noise of its massive business?

"The money in the DB market is predominantly today in the enterprise," NuoDB's Morris says. "It would be very easy staring at a spreadsheet to say 'Who cares about these million startups?' because that's not where the money is. It's easy to fool yourself that that isn't going to turn into the future."

Just as legacy incumbents from server-vendors Dell to HP have found themselves on the wrong side of a shift to commodity servers, or chip giant Intel spent too long ignoring the rise of ARM's RISC chips in phones and tablets, Oracle may not have yet noticed the ground shifting beneath its feet. ®