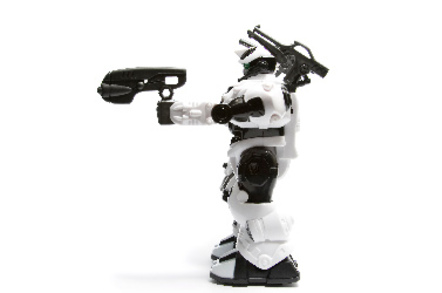 A man who pulled a gun on his opponent during a late-night chess game subsequently surrendered to police following the deployment of a heavily armed enforcement robot.

According to the Seattle Times, a resident in the Washington town of Bellevue had invited a neighbour over for a friendly contest of brainpower across the black-and-white board last week. At first the encounter proceeded sociably enough, but then mine host - perhaps getting the worst of the encounter, or for some other reason ("a few drinks" had been had, apparently) - "pulled a gun".

His opponent understandably elected to forfeit the match and leave the residence at speed, and once safely outside called the police.

This apparently led to a lengthy standoff lasting well into the next day, in which regular meatsack plods - doubtless overawed by the brainy, pistol-packing suspect - failed to get a grip on the situation. Naturally enough, as is traditional nowadays in such situations, they then called in robot assistance.

Of course it's well known that a sufficiently advanced computer has no need to fear even the greatest grandmasters of humanity in a chess game - though in some cases at least, the machines have yet to achieve physical superiority over humans (one unfortunate metal lawman was hurled through a door by an obstreperous offender in Connecticut last year).

Perhaps not caring to trust to its undoubted intellectual superiority or a perhaps less assured margin of physical puissance, the tin cop in this case - rather than challenging the man to a chess game or attempting a mano-a-robo takedown - resorted to superior firepower to subdue its quarry, peppering his stronghold with a salvo of "flash bang" stun bombs and incapacitant gas grenades.

This fusillade of ordnance was apparently sufficient to make the man raise the white flag, and he was duly cuffed by the tin cop's fleshy support team. It can safely be assumed that a celebratory round of doughnuts and battery charging took place afterwards at the station. ®