Ubuntu boss: I want to make a Linux hybrid mobe SO GIVE ME $32m 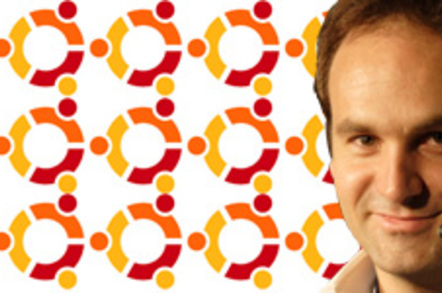 Canonical wants $32m (£20.8m) in donations to launch Ubuntu Edge - its own hybrid Ubuntu-Android smartphone first unveiled a year and a half ago.

The maker of open-source Linux distro Ubuntu announced on Monday it is seeking crowd-sourced cash through Indiegogo in the next 30 days to fund development of the homegrown RAM-packed handset.

The Ubuntu Edge phone can run Google's Android operating system or a mobile flavour of Ubuntu as a smartphone, but when it's docked to a monitor and keyboard it'll become a PC running a desktop mode Ubuntu. Both operating systems have a Linux kernel at their heart.

This hybrid approach was unveiled by millionaire Canonical founder and Ubuntu daddy Mark Shuttleworth at Mobile World Congress in 2012, where he announced Ubuntu for Android smartphones made by the big boys.

Work is underway on this Ubuntu-Android project, which is aiming at an October launch date. But now Canonical is in the process of specifying and configuring its own brand of phone hardware to rival these efforts.

Canonical potentially risks treading on the toes of its partners and confusing the market. But according to space-dreaming Shuttleworth, mobe manufacturers were given a heads up about Ubuntu Edge.

"The makers of the existing high- and mid-markets phones were briefed on this. We saw an opportunity to bridge the gap," he said.

Indeed, Shuttleworth reckons crowd-funding Ubuntu Edge is a way for Canonical, handset makers and networks to try out new features and phones on punters, piloting technology at relatively low risk to themselves.

"This is an interesting exercise in working with the phone industry to see if we can connect to an early-adopter crowd," Shuttleworth said while announcing Ubuntu Edge.

Shuttleworth hopes for the kind of web hype that surrounded the Pebble smart watch. That project set a crowd-funded record - $10m on Kickstarter - with watches now on the shelves at US tech chain Best Buy.

"The phone makers I speak to are excited about this. They will have a mechanism to see what is working among early adopters," Shuttleworth said. "You can think of this as not as us getting in to the phone business, it's us acting as a catalyst for next-generation technologies in the phone."

He stressed, meanwhile, Canonical won't build the Ubuntu Edge itself - that would be performed by an unnamed factory already churning out electronics for the "leading brands" of smart phones.

Specifications for the Ubuntu Edge are preliminary: 128GB of storage, a 4.5-inch 1,280 x 720 HD screen, and the standard smartphone staples such as GPS, accelerometer, Wi-Fi and camera.

Canonical is keeping schtum on the RAM and processor. Shuttleworth said instead his company would "benchmark the silicon as it comes out of the manufacturing process".

"This phone is not going to compete with a standalone desktop or workstation, but for the majority of everyday apps - web email, office - by putting substantially more RAM in we believe we can get more comfortable performance for those every day tasks," he added. ®