We KNEW there'd be an IT angle on the little blighter 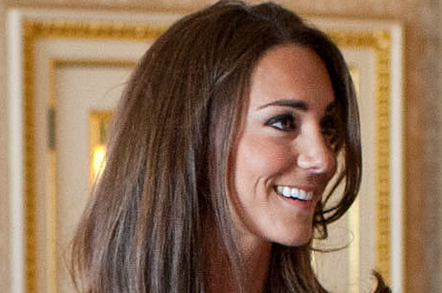 It's the moment malware writers worldwide have been waiting ages for: millions of royal-watchers at home and at work will be in front of their computers, hunting for the first pictures of the soon-to-be-born third heir to the throne.

The Duchess of Cambridge's labour has started, it was confirmed this morning. The baby, whatever its sex, will be third in line to the throne; following a change in the law, if the child is a girl* she will not be leapfrogged by a younger brother to the crown.

And as with many a popular story - be it a natural disaster or celebrity death - malware-flingers have long been gestating plenty of scams and malware which they are more than ready to deliver.

"Malware authors worldwide have been waiting ages for this," according to anti-malware veteran turned independent security blogger Graham Cluley. "Exclusive first pictures", "Secret video from inside delivery room" and "Sex revealed" images from the royal birth might become the theme of scams, according to Cluley. "I don't want to scaremonger, but it's easy to imagine," he said.

The story of a royal birth will be so big that it's inevitable the bad guys will jump on the bandwagon, according to Cluley, who pointed out that malicious actors had previously menaced Wills and Kate.

Cybercriminals were quick to exploit Kate and Wills' engagement. They were also quick to latch onto a story about a possible pregnant Kate Middleton doll in an attempt to entrap user in malware scams.

High-profile news stories are often used to trick surfers into visiting scareware portals or exploit-ridden sites using search engine manipulation, or blackhat SEO tactics. But virus writers are unreliable types at the best of times, so scams do not always appear.

Sean Sullivan, a security adviser at F-Secure, joked that scams might be more likely if Kate gives birth to twins.

He said: "So, it it were twins, and a C-section, is it the doctor that decides the line of succession. Are there protocols?" ®

* Hours after publication, the Duchess of Cambridge gave birth to a boy, we're pleased to add.