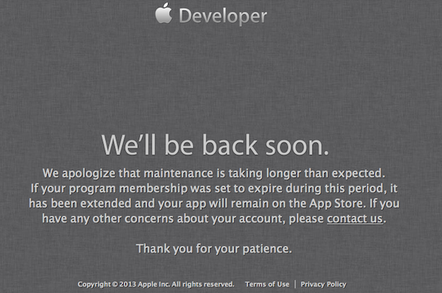 After days of silence over an outage that's outraged developers, Apple has announced that its Developer Centre was subject to an attempted intrusion.

Since Thursday, 18 July, the Developer Centre website has been offline with this message: 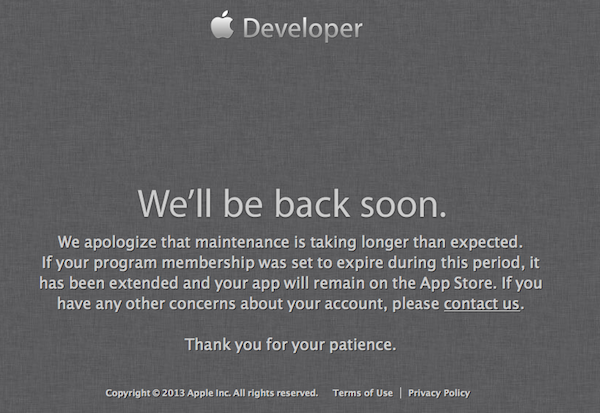 Cupertino's silence has led to increasing speculation that the outage was due to a database breach, and has angered programmers who spent a weekend on the Refresh button wondering when the site would return. As Australian Developer Centre user Josh McKinnon blogged: “Apple is a seriously customer-focused company, and they are treating us developers with contempt because we are not their customers.”

Apple has now decided to come clean, to an extent. Macworld is now reporting an e-mail sent to developers:

“Last Thursday, an intruder attempted to secure personal information of our registered developers from our developer website. Sensitive personal information was encrypted and cannot be accessed, however, we have not been able to rule out the possibility that some developers’ names, mailing addresses, and/or email addresses may have been accessed. In the spirit of transparency, we want to inform you of the issue. We took the site down immediately on Thursday and have been working around the clock since then.

“In order to prevent a security threat like this from happening again, we’re completely overhauling our developer systems, updating our server software, and rebuilding our entire database. We apologise for the significant inconvenience that our downtime has caused you and we expect to have the developer website up again soon.”

According to Cnet, some users have complained about receiving password reset e-mails, indicating that although passwords were not compromised in the intrusion, the attacker had obtained a number of Apple developer account IDs.

The company has noted that any developers unable to renew their App Store accounts would have their subscriptions extended until the outage is over. ®

A UK-based chap calling himself Ibrahim Balic claims he reported a dozen or so security vulnerabilities in the Developer Centre to Apple shortly before Cupertino yanked the website offline last week. It's believed his discovery was treated by staff as a compromise of the system, but yesterday he denied any wrongdoing and insisted: "This is definitely not a hack attack."