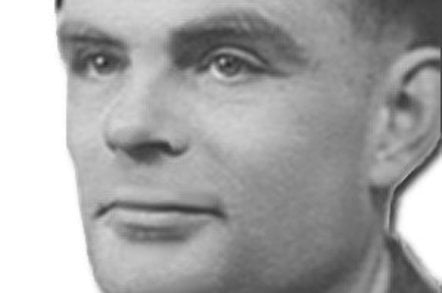 Members of the UK House of Lords have debated a motion to grant a full Parliamentary pardon to Alan Turing, the Second World War savant whose code-breaking skills did so much to ensure the Allied victory.

Turing was one of the key figures who worked at the Bletchley Park cryptanalysis center during the war, decoding German military messages using the very earliest programmable calculators and computers. Historians estimate that the activities of Bletchley staff like Turing, and hardware genius Tommy Flowers, cut the length of the war by years.

Turing was convicted of gross indecency in 1952 after admitting to the then-crime of being a homosexual, and was forced to undergo chemical castration. He lost his security clearance and committed suicide (which was also a crime at the time) two years later.

Last year, the UK government turned down a request for a pardon for Turing, saying that while his sentence was "both cruel and absurd –particularly poignant given his outstanding contribution to the war effort," it must stand since Turing did commit an offence against the laws of his time.

On Friday, the House of Lords debated issuing a Parliamentary pardon to Turing. The proposer - Liberal Democrat Lord Sharkey - said that while the government should issue a full pardon, it was up to Parliament to apply pressure.

The motion received cross-party support from the House of Lords. Baroness Trumpington, who worked at Bletchley during the war and met Turing there, added her support from the Conservative benches for the pardon, saying that without him the German U-boat blockade could have starved Britain out of the war.

"While in 2009 the then Prime Minister Gordon Brown issued an apology for Turing's treatment, this government should do more," she said. "This is not about legal issues but about recognising the debt this country owes Alan Turing."

A Parliamentary pardon isn't as good as the real thing, but is at least a step in the right direction. The government has indicated that it won't stand in the way of the House of Lords motion, but so far it looks unlikely to budge on clearing the record of an authentic British hero. ®

Ten mice and a million cores are going to prove it