Ex-prez Carter: 'America has no functioning democracy' with PRISM 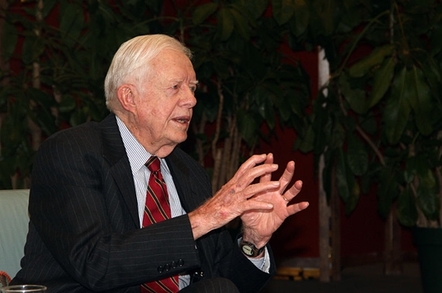 Updated Former US President Jimmy Carter has applauded the whistle-blowing of Edward Snowden and says the current surveillance state means the US is in dire political straits.

"America has no functioning democracy," Carter told a meeting of The Atlantic Bridge in Atlanta on Tuesday, Der Speigel reports.

Carter said that Snowden's revelations had been "helpful," and said that the US was losing its moral authority in the world thanks to schemes like PRISM. During the meeting, he also criticized the influence of money in US domestic politics, the increasing partisan divide in Congress, and election-rule manipulation.

Last month Carter told CNN that Snowden's information could have a positive effect, and said that the American people had a right to know what their government is up to. If Ecuador wanted to give Snowden asylum, that was its right to do as a sovereign nation, he said.

Carter's views diverge sharply from those of the former president George W. Bush, who oversaw the setting up of PRISM and similar schemes. He said that Snowden had damaged the country and that PRISM protected America and didn't infringe on civil liberties.

"Ultimately, history will judge the decisions I made," Bush said earlier this month during a tour of Africa with President Obama. "I won't be around because it's going to take awhile for the objective historians to show up. And so I'm pretty comfortable with it. I did what I did. I know the spirit in which I did it."

While President Carter is a man known for speaking his mind, the recent comments are unusually harsh criticisms. When asked if his Carter Center human-rights non-profit would certify US elections as fair, the former president said he was skeptical – and that's worrying coming from a man of his credentials.

All of this doesn't help Snowden, however. He's still presumed to be stuck in the transit lounge of Moscow's Sheremetyevo International Airport while his asylum requests are sorted out. Carter's opinions might carry moral weight (they don't give you the Nobel Peace Prize for nothing, after all), but will have little effect on US policy. ®

As readers have been quick to point out, President Obama was awarded the Nobel Peace Prize in 2009 with very little done to show for it.

Whereas Carter has worked tirelessly since leaving office to make the world a better place, mediate conflicts, and even eradicate a major parasitic illness, the choice of Obama is harder to justify. This hack suggests it was awarded simply as an expression of relief by the Nobel committee that he wasn't his bellicose predecessor.

Although Obama got most US troops out of Iraq and eventually will do the same in Afghanistan, he could hardly be described as a successful peacemaker – but he's not the first to get a difficult-to-justify Peace Prize. It's widely misreported that 1950s satirist Tom Lehrer quit performing, saying "Satire is dead," after Henry Kissinger shared the 1973 Nobel Peace prize with the North Vietnamese leader Lê Đức Thọ (the latter refused to accept the prize).