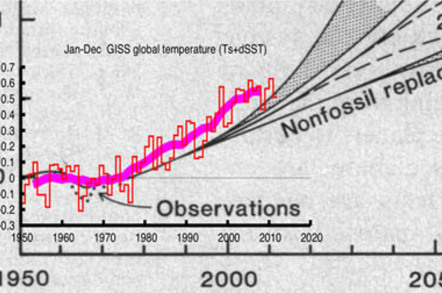 CO2 emissions trading schemes are supposed to impose costs on emitters of the controversial gas, the better to reduce the amount of stuff pumped in the atmosphere.

The scheme was yesterday floated as a replacement for Australia's current fixed price on CO2, a politically toxic policy that saw the nation's Opposition run a protracted attack that ultimately felled former Prime Minister Julia Gillard.

Gillard's replacement, Kevin Rudd, yesterday said the fixed price will end in July 2014, a year earlier than current plans call for a floating price to come into force. If the plan passes parliament, Australian companies will be able to buy CO2 at about $AUD6 a tonne, down from around $24 today.

That cut is good populist politics in Australia, but one that made for financial woes as the expected revenue from tax levied at has already been accounted for in the nation's budget. Rudd was therefore left looking for savings to offset the soon-to-vanish carbon-derived.

Enter Microsoft, which as we reported in February had already taken a $AUD100m hit to the sums it extracts from Australia's federal government thanks to a newly-consolidated deal. Our last report also features Australia's CIO John Sheridan mentioning a successor to that agreement.

The successor, it has since emerged, was signed three weeks ago and slashes another $100m from Australia's bill for Microsoft wares. Australia's Department of Finance and Deregulation has confirmed to The Reg that the agreement mentioned at the link above and does represent a new saving.

That saving was quickly announced as one of the ways the nation's government will be able to afford reduced revenue from CO2, making Microsoft an indirect source of funds for the new emissions trading scheme.

The Department of Finance has also said the new agreement means Australia is paying the same price for Microsoft products as US governments. That achieving parity has meant an extra $100m in savings just three years after a deal that shaved the same amount from the nation's bills will surely raise eyebrows in government procurement offices around the world.

The rather nicer workplaces inhabited by equities analysts will also be interested in the new deal. Australia and the USA enjoy very close dialogue: the former's decision to boot Huawei from those permitted to supply its National Broadband Network came after a visit by US President Barack Obama. If the USA is sharing details of what it pays for Microsoft's wares with other allies and similar savings are possible around the world, Redmond's bottom line may well be about to ensure some nasty dents. ®