Is your Apple gadget made of human misery and eco-ruin? 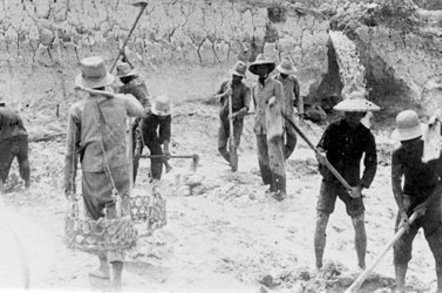 Apple has sent a squad of eco-warriors to a far-flung Indonesian island on a mission to find out whether its devices are full of tin from mines which destroy the environment and kill their workers.

The fruity firm said its team embarked upon a "fact-finding visit" to Bangka Island to see whether its suppliers source their tin from unregulated and dangerous mines. Its announcement follows a long and concerted campaign by Friends of the Earth, who want Apple to 'fess up to where their tin supplies come from.

Cupertino wants to make sure that none of the tin which is used in its devices comes from the notoriously grim mines on the Indonesian island. An investigation by Friends of the Earth last year claimed that between 100 and 150 people die in the mines every year. It also found the mines caused significant environmental damage to the islands.

Tin is used in the transistors, resistors and circuit boards of iDevices and other Apple products. About half of all the world's tin is used to make solder, a crucial part of all most electronic devices.

On its Supplier Responsibility blog, Apple said its suppliers use tin to manufacture 249 components used its consumer products.

In a statement, Apple said: "Bangka Island, Indonesia, is one of the world’s principal tin-producing regions. Recent concerns about the illegal mining of tin from this region prompted Apple to lead a fact-finding visit to learn more. Using the information we’ve gathered, Apple initiated an EICC working group focused on this issue, and we are helping to fund a new study on mining in the region so we can better understand the situation."

Friends of the Earth has previously claimed Apple is "using tin that's wrecking the environment - but refusing to admit this to customers". The eco-charity wrote a letter to Tim Cook urging him to come clean about where tin firm and warning of the ecological and human cost of tin-mining operations on Bangka Island. The campaign was backed by 24,000 FoE supporters.

Samsung admitted using tin from the island in April of this year and launched its own fact-finding mission. The South Korea firm said: "While we do not have a direct relationship with tin suppliers from Bangka Island, we do know that some of the tin that we use for manufacturing our products does originate from this area.

"We are also undertaking a thorough investigation of our supply chain in the region to better understand what is happening, and what part we play." ®