Brits: Give us £1m and we'll build a crack ALIEN-HUNTING TEAM

First we're snooping on the world, now we'll snoop on the galaxy 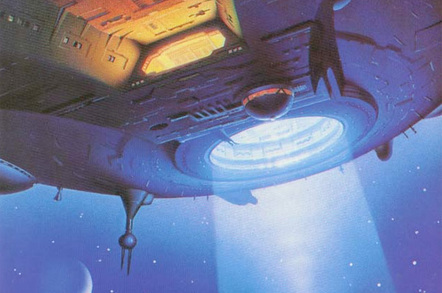 A group of British scientists have launched a new mission to find signs of extraterrestrial life way out in the depths of space.

Boffins from 11 different universities and scientific bodies have joined forces to organise a search for little green men. The group - called the UK Search for Extraterrestrial Intelligence (SETI) Research Network - held its first formal session on Friday at the annual National Astronomy Meeting held in Scotland's University of St Andrews.

The brainstorming get-together was the first time British boffins had gathered to discuss the search for aliens since 2010. Now they need to work out how to fund the effort.

The US spends far more time and money looking for aliens than all other nations - but that's private money, not taxpayers' cash. Donors to the US SETI Institute have included William Hewlett, David Packard and Gordon Moore.

Meanwhile, UK SETI Research Network coordinator Alan Penny said the group will be asking for a piece of the British government's science budget. Sir Martin Rees, English Astronomer Royal, will serve as the group's patron and hopes to plead its case for the £1m in annual funding Penny reckons it needs.

"If we had one part in 200 - half a per cent of the money that goes into astronomy at the moment - we could make an amazing difference. We would become comparable with the American effort," he said.

At the alien finders' first meeting, they discussed ways to conduct the search. Eamonn Ansbro, an Irish astronomer, suggested looking closely at our local solar system to find alien probes. Another speaker, Anders Sandberg, later performed a game theory analysis of a "deadly probes scenario", in which sociopathic aliens send out robo-drones to destroy any fledgling civilisations they come across.

However, this may be unlikely if Austin Gerig's Universal Doomsday theory is true. The Oxford University research fellow discussed the thought that civilisations don't really last long enough to find extra-terrestrial life because they spend too much time killing each other. Cheery stuff indeed.

Much of past SETI research has relied upon listening out for radio signals from far-off civilisations, which would not only prove their existence, but give human pop fans some really far-out tunes to listen to.

Although it is far from certain that cash-strapped British funding bodies will hand over cash to alien hunters, Jodrell Bank associate director Tim O'Brien said it could easily be done on the cheap by piggybacking current projects.

For example, Jodrell Bank has now joined up with a network of seven radio telescopes across Britain in the e-Merlin project to research important scientific phenomena such as the formation of stars and black holes. The telescopes are connected to Jodrell Bank by a superfast optical fibre network, effectively allowing them to work simultaneously. The network has just come online.

"You could do serendipitous searches," said O'Brien.

"So if the telescopes were studying quasars, for example, we could piggy-back off that and analyse the data to look for a different type of signal - not the natural astrophysical signal that the quasar astronomer was interested in, but something in the noise that one might imagine could be associated with aliens. This approach would get you SETI research almost for free.

"There are billions of planets out there. It would be remiss of us not to at least have half an ear open to any signals that might be being sent to us." ®