If BlackBerry were a bunch of startups, would you invest?

Silver lining is hard to find, but it's there

Analysis Despite recording top-line growth and an increase in cash, BlackBerry took a pummelling on Friday. Short sellers cashed in, and even the most loyal enthusiasts took to fan sites this weekend, questioning their own commitment. The renewed concern is because uptake of the new OS, BB10, came in below estimates.

The figure the company gave for shipments of BB10 devices into the channel (not real sales) was just 2.7 million units. BlackBerry is now behind Windows Phone in terms of new sales.

So, shareholders long on BBRY have a few straws to cling to – but not many. And rather ominously, the implications for the company’s competitive strategy of BB10’s hefty memory requirement are only beginning to sink in.

Many BlackBerry owners today will only consider low-priced handsets – because that’s all they can afford. While Nokia is cranking out low-end devices performing well with just 512MB of RAM, the working set for BB10 today is 1GB, and all three BB10 devices ship with 2GB.

To meet the demand of a price-constrained market, BlackBerry has been forced to backtrack, and will release at least one new model this year based on the now deprecated OS BB7, after a two year hiatus. (The last new BlackBerrys were released in the summer and early autumn of 2011.) This rather puts a spoke in the narrative of a smooth transition to a new platform. There’s more pain to come, company officers warned, in this quarter.

For some clarity, let’s take a market-based approach, thinking of BlackBerry as an empire encompassing three declining businesses, one constant, and three quite interesting new startups.

Decline and fall of the RIM-an empire

The declining businesses are well-known. Firstly, there’s sales of handsets based on the ancient OS, which are bundled with data services, which is the second revenue stream – the latter accounts for around 20 per cent of BBRY revenue.

Thirdly, there’s the secure email server cum-application environment: BlackBerry Enterprise Service, or BES. (BlackBerry made it slightly easier for us all on Friday, by effectively killing off one legacy business, the tablet.) RIM owed its success to how tightly bound together these businesses were. RIM’s data network was a necessity, but once it was running it could offer consumers a flat rate, no-surprises data plan and best-in-class messaging.

Enterprises who used the messaging found they had better device management than anyone else could offer, through BES. All three are in decline, for reasons that hardly need repeating.

The constant is the QNX embedded division, acquired in 2010, a mature business powering everything from cars to nuclear power stations, that’s largely impervious to its parent’s fortunes.

The three startup businesses are: one flogging new, modern touchscreen smartphones, another offering mobile device management in the BYOD era, and the wildcard – a social network-cum-OTT messaging app, BBM. Yet, just as the tight integration helped RIM when it was on the up, it threatens to pull the startups with it, now that the company is in decline.

Take up of BB10 is the main concern. Is the tepid response to BB10 in its first full quarter the result of the staggered global rollout (the UK was a guinea pig here, while AT&T only began to ship the Q10 in May)? Or is it because customers are baulking at yet another ecosystem choice, and the BB10 handsets are too pricey? Or is the slow start simply to be expected - a natural response from IT as enterprises take months evaluating a complex server product?

I see evidence to support the case of both bears and bulls, here. BlackBerry opted to launch devices that demanded a premium, on a par with the Galaxy S4 and iPhone 5.

The Z10 is a respectable handset, and it’s a nice all round midrange handset. But the UI can be obtuse, and there’s no app ecosystem to speak of; the out-of-the-box experience for Facebook or Twitter or Evernote users, for example, is very poor. 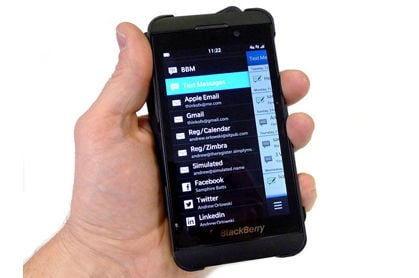 BlackBerry's Z10: not exactly flying off the shelves

Why charge a premium when it has been a very long time – several years, in fact – since BlackBerry was a premium brand in affluent markets? Successive generations of glitzy iPhones and Galaxys have been able to command a premium because of their hi-spec hardware and their maturing app and content ecosystems markets.

The value of the ecosystem is priced into the deal – and anything less than the full monty here is unsentimentally snubbed by consumers. The Z10 looks dead on arrival and the CEO’s description – “an effective launch product to showcase the renewed and reengineered BlackBerry 10 experience” – is the sort of gritted-teeth statement that accompanies a dud. If Z10 numbers were good, you could be sure we’d know about them. 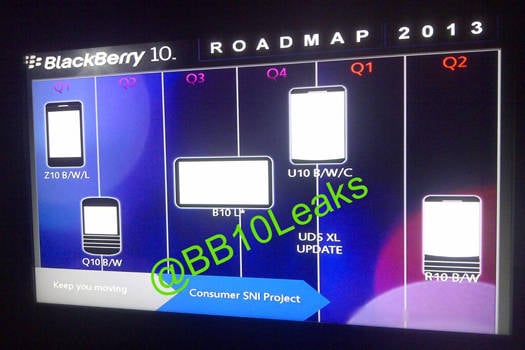 This BlackBerry roadmap was leaked on 29 March, though the Twitter account-holder who posted it later claimed it was an April Fool's joke...

Nokia made a similar same mistake with its first Windows Phone devices – it insisted on premium pricing for the Lumia 800 and 900 when they weren’t really premium handsets. Now Nokia is finding some success with a value proposition, by knocking out very capable handsets at bargain basement prices.

Again, because the value of the ecosystem is priced in, punters think “this is a bargain, and I can live without Instagram or Hailo”. Nokia doubled its UK market share (May 2012-May 2013) from 4.1pc to 7.8pc while RIM/BlackBerry’s fell from 8.3pc to 2.9pc. The story is similar across the West, while its crash has been spectacular in emerging markets: where the spending power is so much lower. In Mexico BlackBerry share fell from 32pc to to 11pc. Cheap Android and recent budget Lumias are going to make even a BB10-on-liposuction a hard sell in markets like Mexico.