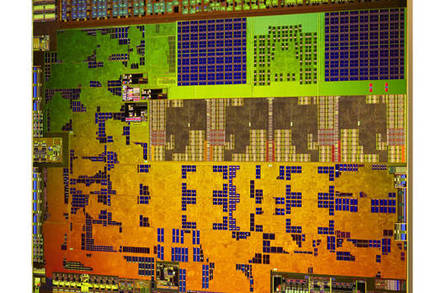 LibreOffice, the open source office suite created by disaffected Oracle developers, has signed up Advanced Micro Devices to the free software cause and plans to add the chip company's GPU acceleration system to the code base.

The Document Foundation (TDF), which produces LibreOffice, already has Intel on-side for silicon and financial support, but the addition of AMD is designed to use the firm's graphics processing engine to speed up spreadsheet calculations in particular, which will come as welcome news to users who have complained that the Calc app was too slow.

"It is great to work on LibreOffice with The Document Foundation to expose the raw power of AMD GPUs and APUs, initially to spreadsheet users," said Manju Hegde, VP of heterogeneous solutions at AMD, in a statement.

"Bringing the parallelism and performance of our technology to traditional, mainstream business software users will be a welcome innovation for heavy duty spreadsheet users, particularly when combined with the compute capabilities of the upcoming generation of AMD Heterogeneous System Architecture (HSA) based products."

The HSA approach allows software to switch between CPU and GPU to get maximum grunt as needed by putting them on the same processor package (where possible) and sharing the same access to memory for more seamless linkage. AMD already has open source optimization tools for OpenC, Python, Java, JavaScript, and C++ AMP to use the system.

"It is exciting to work together with AMD and their ecosystem to take advantage of AMD's cutting edge innovation right inside LibreOffice," said Michael Meeks, TDF board member. "The growth in performance and is something we're eager to expose to LibreOffice users."

The AMD announcement is another round of good news for the open source rebels. After Oracle showed less-than-enthusiastic support for the OpenOffice project it inherited from Sun Microsystems, the TDF was formed as a fork and has been growing fast with multiple revisions to the install code and plans for an extension into Android, iOS, and the cloud underway.

OpenOffice development, meanwhile, has languished as a part of the strife, with Oracle offloading the code onto the Apache Software Foundation as soon as possible. It has been named a Top-Level Project by the ASF and the team tells El Reg it'll publish when the software is good enough.

There's still a large OpenOffice user base, but the increasing industry support for LibreOffice has got to be worrying for the original squad. ®