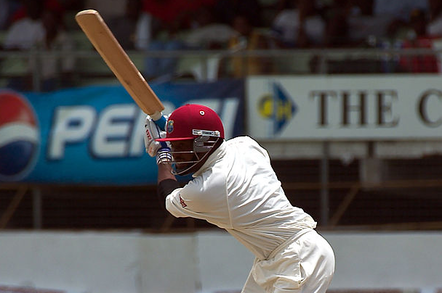 The unique human ability to hurl objects such as cricket balls fast and accurately is what lifted us above our early rivals for world dominance, according to new research.

"There were essentially two questions we asked – one of them was why are humans so uniquely good at throwing, while all other creatures including our chimpanzee cousins are not," explains postdoctoral boffin Neil Roach. "The other question was: How do we do it? What is it about our body that enables this behavior, and can we identify those changes in the fossil record?"

It was humans' excellent throwing ability - initially employed in hunting using primitive spears or rocks, rather than on the cricket pitch - which enabled us to become effective carnivores and so outstrip our potential simian rivals. A statement highlighting Roach and his colleagues' research explains:

Though they're known to throw objects (often feces) underhand, chimps, on rare occasions, do throw overhand, but those throws are far less accurate and powerful than those of [a human child]. Additionally, chimps throw as a part of display behavior and never when hunting.

Underarm rounders-style poo flinging, then, is the most that chimps and suchlike ever bothered with, while primitive Homo Erectus was learning to bring down large game and generally developing all sorts of abilities which would one day culminate in the modern fast bowler.

"The ability to throw was one of a handful of changes that enabled us to become carnivores, which then triggered a host of changes that occurred later in our evolution," says Daniel Lieberman, Harvard biology prof, who worked on the new analysis alongside Roach. "If we were not good at throwing and running and a few other things, we would not have been able to evolve our large brains, and all the cognitive abilities such as language that come with it. If it were not for our ability to throw, we would not be who we are today."

Other boffins have recently argued that it was possession of advanced stone-tipped spears and "atlatl" thowing sticks which allowed people 70,000 years ago to conquer the Neanderthals and achieve final planetary dominance. However Lieberman considers that this was unimportant compared to the original evolutionary changes which permitted both branches of proto-human to throw properly at all.

"That means that for about 1.5 million years, when people hunted, they basically had nothing more lethal to throw than a pointed wooden stick," he continues. "If you want to kill something with that, you have to be able to throw that pretty hard, and you have to be accurate. Imagine how important it must have been to our ancestors to throw hard and fast."

Lieberman and Roach actually mention the esoteric US sport of baseball a good deal in their discussion of the superiority of human hurling abilities over those of (for example) chimps, and even imply that in some way the modern North American game (descendant of rounders and its chimp-style underarm poo bowling) might include superior throwing tactics to the ancient game of cricket as played all around the world.

"Chimps throw overhand using either a dart throwing motion, where the elbow is extended, or much like a cricket bowler," claims Lieberman.

"That led us to studying cricket bowlers and trying to understand what happens when you keep your arm straight, and why that diminishes your throwing ability," continues Roach.

Except that it doesn't. The fastest cricket ball ever bowled, according to the Guinness book of records, left Shoaib Akhtar's hand at 100.23mph. The fastest baseball was pitched by Lynn Nolan Ryan at 100.9mph, negligibly faster. But a cricket ball is anywhere from a quarter to three-quarters of an ounce heavier than a baseball, indicating that Akhtar's throw imparted around ten per cent more kinetic energy.

So it would seem that the two boffins may be well up on their bones and fossils, but perhaps not so much on their sporting knowledge.

Their research is, however, featured on the cover of today's edition of hefty boffinry mag Nature. ®

There is much argument about the history and ancestry of rounders, baseball, cricket etc, with some Americans arguing that baseball - despite resemblances of equipment, layout etc - is not actually descended from the schoolgirl game of rounders (and some saying that the totally dissimilar sport of cricket really is).

One might put all that to rest by pointing out that no less a source than the Hitchhikers' Guide to the Galaxy books reveals that cricket is in fact derived from symbology attaching to an ancient galactic war of genocide far pre-dating the planet Earth itself, and as such has nothing to do with modern round-bat aberrations.