ENIAC - a time before integrated circuits 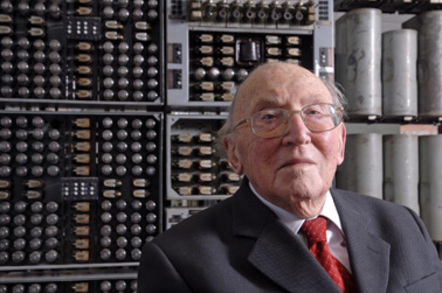 Centenary Born this day 100 years ago in Cambridge, Sir Maurice Vincent Wilkes was a pivotal figure in the world of digital computing.

Few would dispute the critical role played by Wilkes in developing practical computing that would ultimately lead to the accessible machines we rely upon today. Certainly for the British computing scene, his contributions were vital.

A brilliant mathematician and physicist, Wilkes was instrumental in establishing the Computer Laboratory at Cambridge University in the 1930s, which he ran following wartime service researching telecommunications and radar systems.

But it was in 1946 he began the work for which he is still best known - the development of the Electronic Delay Storage Automatic Calculator (EDSAC). EDSAC was a general purpose, electronic digital stored-program computer inspired by John von Neumann's (Electronic Discrete Variable Automatic Computer (EDVAC) binary architecture.

Operational in 1949, EDSAC used vacuum tubes for logic, mercury delay lines for memory, punch tape for input and a teleprinter for output.

EDSAC stands out for two reasons.

Importantly, from its inception, EDSAC was developed as a practical computer rather than a blue-sky concept, and this approach typified Wilkes' life work. 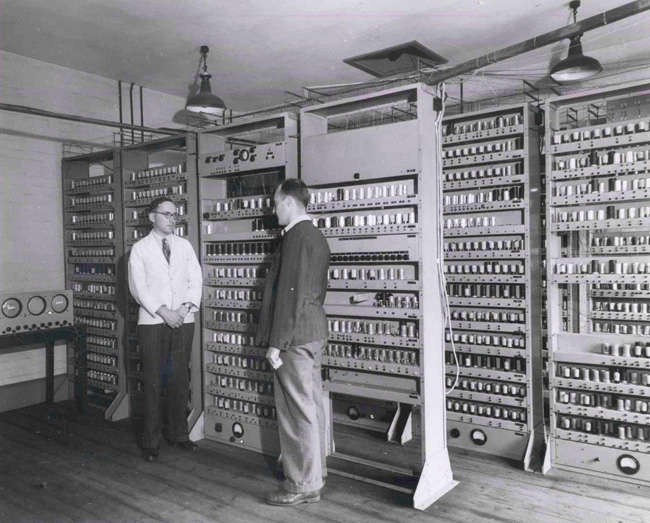 Before becoming a Sir: a white-coated Maurice Wilkes with EDSAC. Photo credit: the Computer Laboratory, University of Cambridge

EDSAC was immediately put to work making calculations for Cambridge researchers, and eventually became the basis for the Lyons Electronic Office (LEO). LEO, the world's first business computer, was considered sufficiently robust to run the Lyons catering business to run administrative applications. LEO was soon farmed out to other businesses and became the basis of a national international computing empire, featured in the first installment of The Reg’s Geek’s Guide to Britain.

What also helped make EDSAC unique was its relatively compact build compared to other contemporary electromechanical and electronic circuit digital programmable machines in use, such as the Z3 or the ASCC.

And a major reason for this was EDSAC favored vacuum tubes over switch/relay logic. Vacuum tubes not only meant a smaller machine, because they performed the role previously done by the bigger physical hardware, but they also meant faster, more powerful and more reliable processing combined with the ability for EDSAC to process different types of workloads.

In a world of integrated circuits and compact design, it’s hard to comprehend how a device that at best resembles a lightbulb and at worst something from a Flash Gordon rocket ship could make a real-life computer run.

In this context, a vacuum tube, thermionic valve, or electron tube describes a sealed component controlling electric current through a vacuum. A typical early tube was cylindrical (sort of), constructed from thin glass, and operated as a simple diode - a light-bulb style filament heating up to direct flow in a single direction through a vacuum to an electrode, enabling rectification. Further developments saw more sophisticated three electrode (triode) designs enabling controlled electronic amplification, leading to applications such as switching, so crucial to computational machines.

The big leap forward provided by vacuum tubes was that they meant a shift away from electromechanical computers - which had used levers and gears or relays (Z3) - to electronic computing. They replaced the magnetically operated switching relays carried forward to early computers from telegraph circuits and telephone exchanges.

One of the first computers credited with using vacuum tubes was the Atanasoff-Berry Computer (ABC). It was built in 1937 but was not programmable and was designed primarily to solve linear equations. The Colossus computers, in working order from 1943 and used from early the next year onwards to crack the German military commands during World War II, also used tubes and were programmable. This was also the case with Electronic Numerical Integrator and Computer (ENIAC), which began work for the US Ballistic Research Laboratory in 1948. ENIAC forged the way for a generation of programmable vacuum tube computers from 1949, spearheaded by Wilkes' EDSAC.

Although vacuum tubes ultimately made electronic computing a reality, pioneering engineers were initially concerned about their relative fragility, short life, unreliability, and high failure rate when compared to electromechanical relays.

Fortunately, brilliant Colossus designer and General Post Office engineer Thomas “Tommy” Flowers decided that thousands of vacuum tubes could and should be used reliably in an electronic computer as long as the environment was stable and the circuits were kept on constantly. Flowers had seen vacuum tubes in action at the GPO’s newer phone exchanges.

Next page: 5,936 glass valves sitting on a wall...
Page:
Tips and corrections