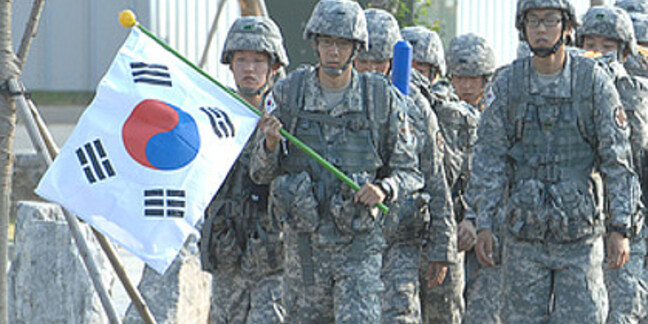 Both North and South Korea are under cyber attack from a group of unidentified hackers who blitzed senior government officials' websites and a group of media companies.

The website of the South Korean presidential office and prime minister's office were among the sites hit on Tuesday morning.

"The government confirms there was a cyberattack this morning by unidentified hackers that shut down several sites including the presidential Blue House, the prime minister's office and some media companies," the South Korean science ministry said in a statement reported by the Wall Street Journal.

The attack coincides with the anniversary of the start of the Korean War on 25 June 1950, which resulted in the division of the Korean peninsula between North and South Korea.

Most of these sites, targets of previous campaigns by hacktivist group Anonymous, are actually run from servers hosted in China. Elements of Anonymous have claimed responsibility for the attacks against the North but the situation remains confused, the BBC reports.

South Korea has raised its state of alert in response to the attacks, which are minor compared to attacks in March against South Korean banks and broadcasters that disrupted banking services. An estimated 32,000 computers were infected with malware designed to trigger at a pre-set time. The March attacks came at a time of heightened tensions on the Korean peninsula following nuclear tests by the Norks.

Chris McIntosh, chief exec at ViaSat UK and a former Royal Signals officer, said that further attacks are almost inevitable. He added that others can learn from the experiences of the Koreans.

“We know this isn’t the first such attack against South Korea, and it certainly won’t be the last," McIntosh said. "Put simply, despite such attacks swiftly becoming a fact of life there is still too much evidence of an 'it couldn’t happen here' mentality."

"Organisations need to assume from the very start that their networks have already been breached by cyber criminals or worse and implement people, procedural and technological control measures based on this,” he added.

“Since an attacker will go for the lowest-hanging fruit, every point of weakness and potential interaction with the outside world needs to be identified, whether it is how information is stored; how data is moved; how the network is accessed; and, most simply, exactly what technology people are using.” ®

Rik Ferguson, VP of security research at Trend Micro, said that while the attacks against North Korean targets appear to be routine DDoS assaults, the attacks against South Korean websites appear to be more focused on defacement. These involved apparent attempts to discredit Anonymous by portraying elements of the hacktivist group as responsible for attacks on South Korean websites.

"The attacks on South Korean sites appear somewhat different, less about Denial of Service and more about access, exploitation and defacement," Ferguson said. "One video posted briefly on YouTube showed an attacker using a tool call w3b_avtix apparently to connect to the website of the South Korean president, exploit a vulnerability, gain access and upload defaced content to the website."

"Everything has been done to brand the video as an "Anonymous" attack; however, one of the most vocal Twitter users (@anonsj) associated with Anonymous activity in Korea has disavowed any attacks on South Korean web sites."