'Pay no attention to those numbers, look at our CLOUD' 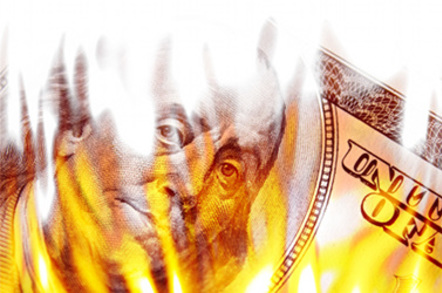 Oracle execs were quick to talk up the company's cloud efforts during its Q4 2013 earnings call on Thursday, but slow software sales disappointed investors and sent Oracle's shares tumbling in after-hours trading.

Total revenues for the fourth quarter of Oracle's fiscal 2013 were flat at $10.9bn when compared to the same period last year, missing analyst estimates by about 3 per cent. Revenue for fiscal 2013 was unchanged from the previous year, as well, coming in at $37bn.

Sales of new software licenses are considered a key bellwether for Oracle's overall performance, and although they were up for the quarter, they weren't up by much. Oracle had earlier forecast software sales growth of as much as 11 per cent, but the actual figure was just 1 per cent, bringing the total to $4bn in new software sales.

That's still a record figure for Oracle, as co-president and CFO Safra Catz observed in Thursday's earnings call – but it certainly wasn't the kind of growth investors were hoping to see.

New software sales for fiscal 2013 were $10.3bn, up 4 per cent from the previous year, which was slightly less disappointing but still nothing to write home about.

Elsewhere, Oracle's hardware division continued to struggle. Although CEO Larry Ellison said revenue was up 50 per cent for the company's Engineered Systems, and Catz said hardware revenue was "better than expected," the actual figure was just $849m – down 13 per cent from the previous year's quarter.

Catz said Oracle is seeing light at the end of that particular tunnel, however, and went as far as to predict that the hardware division might even see growth as early as the first quarter – but that's a pretty big maybe. Oracle's hardware revenue was down 21 per cent for fiscal 2013, and it's going to be tough to put the brakes on that slide.

Oracle co-president Mark Hurd put a positive spin on Oracle's prospects, claiming the company's customer attrition rate is down and its sales reps are hustling harder than ever.

"By June 7 we had 90 per cent of our territory assignments and quotas done, with sales plans accepted," Hurd said. "That is an absolute record for Oracle."

Hurd and Ellison also made a point of directing investors to Oracle's cloud efforts, which they characterized as industry-leading.

Oracle now has 5,000 customers on its cloud services, Hurd said, adding that Oracle's systems process some 16.5 billion transactions per year across 8 million users, 13,000 virtual machines, and 70 petabytes of data.

Ellison added that the bulk of Oracle's sales adds have gone to its cloud division, and said that the company had hired 500 new sales consultants to focus specifically on the cloud.

"Next week we will be announcing technology partnerships with the largest and most important SaaS companies and infrastructure companies in the cloud," Ellison said, "and they will be using our technology and committing to our technology for years to come."

But all this cloud rah-rah aside, it was still a fairly lackluster quarter for the database giant, with net profit up a modest 10 per cent year-on-year to $3.8bn, or 80¢ per share. Total net profit for fiscal 2013 was $10.9bn, a 9 per cent increase.

On the positive side for Oracle shareholders, the company announced that it is doubling its annual dividend to 12¢ per share.

Overall, however, the news did not enthuse investors, and Oracle's shares shed 2.6 per cent following the earnings announcement and another 8.7 per cent in after-hours trading, to land at $30.33.

Oracle's shares won't stay there for long, though – that is, they're literally moving. Simultaneous with its earnings statement, Oracle announced that its board has given the go-ahead for the company to leave the NASDAQ Stock Market and begin trading on the New York Stock Exchange under its current symbol, ORCL. If everything is approved, the move to the NYSE will be effective July 15, 2013. ®