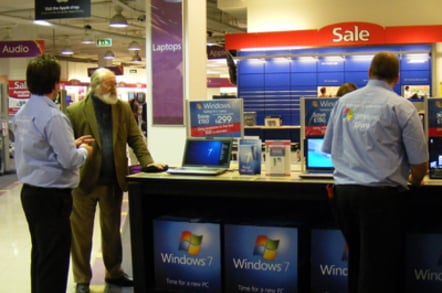 Dixons Retail has reported massive losses due to one-off charges from the restructuring of PIXmania, and a reshuffle at its HQ following the sale of its B2B reseller operation Equanet.

The LSE-listed group told the City this morning that it made pre-tax losses of £115.3m in the year to 30 April, albeit narrower than the £118.8m pre-tax loss it filed last year.

Charges amounted to £209.8m, including £8.4m biz restructuring (which included £64.6m for the PIXmania re-org and £22.9m for its Bury site reshuffle and “onerous” lease costs) as well as £9.4m in business impairment costs.

But outside of those exceptional expenses the underlying operation improved, with sales rising four per cent to £8.2bn and group underlying profit before tax up from £82.1m last fiscal year to £94.5m this year.

Cash is king, as any business owner will confirm, and in this respect Dixons did rather better than the close of last year, generating net cash of £42.1m – versus net debt of £104m.

As is now well documented, not all retailers can beat their chests with the same gusto, including Comet, whose demise rather benefited Dixons.

Dixons' sales in the UK and Ireland for the year were up seven per cent to a little over £4bn and operating profit rose 39 per cent to £113.3m.

The company estimated that it captured 21 per cent market share in the year, "driven by our clear strategy and accelerated by the closure of a number of competitors including our largest UK specialist electrical competitor Comet…against a relatively weak market."

In the more profitable Northern European operation, sales grew ten per cent (in sterling) to £2.87bn and underlying profits swelled to £120.5m, from £113.7m.

Troubles continued at the Southern European arm, comprising Italy, Greece and Turkey, as sales fell eight per cent. Underlying losses were £24.4m, compared to £31.3m in the previous year.

But perhaps the most challenged of the group's business units was online gadget souk PIXmania. Its turnover was down by nearly a quarter, to £357.5m, versus £491.4m a year ago. The business reported underlying losses of £31.3m; nearly double the £15.2m loss it reported a year ago.

James said Dixons had exploited "consolidation" in the market but warned that "the economic backdrop remains tough; we will have to strive hard to keep up our momentum". ®