That Microsoft-Nokia merger you've been predicting? It's no go

Redmond has reportedly left the table 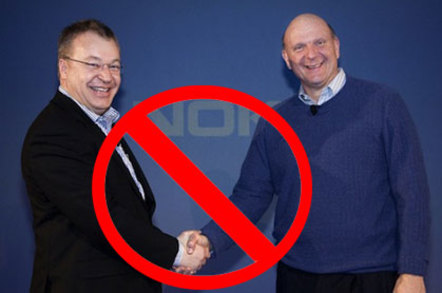 Microsoft's acquisition of Nokia's mobile phone business – the deal you probably assumed would happen sooner or later – has been scuppered before talks were even made public, according to a new report.

On Wednesday, the Wall Street Journal wrote that Microsoft has been engaged in "advanced talks" to snap up the Finnish mobile maker, but that those discussions have recently broken down and are not likely to resume.

Redmond reportedly couldn't negotiate the price it wanted for Nokia, which currently has a market capitalization of around $14.3bn.

What's more, Microsoft was said to be leery of Nokia's weak position in the smartphone market, where it currently trails behind Apple and Samsung.

The Finnish firm's sales certainly are in the dumps. Once it was the world's largest seller of mobile phones, but its most recent quarter saw its shipments down 32 per cent, year over year, and it shipped just 6.1 million smartphones in total, compared to Samsung's 60 million.

The irony, of course, is that this downturn comes in the wake of Nokia's 2011 strategic partnership with Microsoft, in which Nokia CEO (and former Microsoft exec) Stephen Elop agreed to make Windows Phone the exclusive operating system for Nokia smartphones.

In light of that deal, it wouldn't be hard to argue that the deficiencies that make Nokia an unattractive acquisition target for Microsoft are actually Redmond's own fault. Recent Gartner figures show Windows Phone hanging on to just 2.9 per cent of the smartphone market – a smaller share even than BlackBerry's.

The WSJ's sources said the two companies had been discussing the possibility of a sale in talks held in London. Microsoft declined to comment, and a Nokia spokeswoman said only, "We have a deep partnership with Microsoft and it is not uncommon for Nokia and Microsoft to meet on a regular basis."

The report already has some analysts comparing the talks with Nokia to Microsoft's abortive attempt to acquire Yahoo! Microsoft walked away from talks with the beleaguered online firm in 2008, and in so doing, probably dodged a bullet. Yahoo!'s share price has hardly moved an inch since then.

If Microsoft won't buy Nokia, however, there's still a chance that someone will. Also on Wednesday, Chinese equipment maker Huawei floated the possibility of acquiring the Finnish company, though it gave no hint as to whether serious talks are underway.

"We are considering these sorts of acquisitions," Huawei's Richard Yu told the Financial Times. "Maybe the combination has some synergies but depends on the willingness of Nokia. We are open-minded."

Yu didn't elaborate on what he meant by "willingness," but here at Vulture Annex we strongly suspect that Huawei's definition might include Nokia agreeing to relax its death grip on Windows Phone. Unfortunately, Nokia doesn't seem ready to do that, and it probably won't be anytime soon – at least, not until its next two or three quarters' results come in. ®