Still not acquired after bragging two months ago of an 80 per cent sequential revenue bump and an $80m annualized run rate as it exited the first quarter, virtual server-storage appliance maker Nutanix is widening its market appeal with new low-end and high-end configurations.

The former are aimed at SMBs and remote/branch offices and the latter at customers who need more storage capacity than the current NX series appliances can deliver.

El Reg spilled the beans on some of the feeds and speeds of the new NX-1000 and NX-6000 machines back in early May, when Howard Ting, vice president of marketing, was feeling a little chatty. Like the existing NX-2000 and NX-3000 appliances, the new machines all run the Nutanix Distributed File System, which used to be called the Scale-Out Converged Storage virtual disk controller, or SOCS for short.

This is a bit of software cooked up by Nutanix techies in-house, and it runs on a few of the cores on each node in a Nutanix cluster. NDFS takes Fusion-IO PCI flash cards (only available in some of the models), Intel SATA SSDs, and Seagate disk drives and creates a virtual storage pool that all of the virtual machines in the cluster can access.

It turns server nodes into a virtual SAN, and that eliminates the need for buying a free-standing - and usually quite expensive - SAN dedicated to the virtualized server pool.

With the NX-1050, Ting says that Nutanix is trimming down its entry NX-2000 system configuration, which is comprised of a Super Micro Twin chassis with four half-width, two-socket server modes.

The idea is to drive the node price down and make the feeds and speeds better match the needs of SMBs or remote/branch offices. Each of the four server nodes in the NX-1050 has two six-core "Sandy Bridge-EP" Xeon E5-2620 processors running at 2GHz and the node comes with a base 64GB of main memory, expandable to 128GB. The machine is set up with one Intel S3700 solid state disk with a 400GB capacity plus a single Seagate 1TB disk drive per node (expandable to a total of sixteen drives shared by all the nodes).

The NX-1050 has two 10Gb/sec Ethernet ports and two Gigabit Ethernet ports on each of the nodes, with a 100Mbit/sec port used for management. With the right mix of memory and disk, this node is able to support 25 to 50 virtual desktops set up for knowledge workers like you and me if they are being served from virtual desktop infrastructure (VDI) brokers like VMware View or Citrix Systems XenDestkop.

All in, with the NDFS software installed and the nodes loaded up with the base memory, flash, and disk and placed into the tray server chassis, Nutanix is charging $22,500 per node (not per enclosure with four nodes, but per node) for the NX-1050. The idea is that this Nutanix cluster-in-a-box is more appropriate for remote and branch offices and can be used to consolidate a slew of workloads - file serving, VDI, WAN optimization, domain serving, and so on - that are being done by a bunch of different machines.

And as you might expect, a lot of the cost of those nodes is represented by the NDFS software, not the underlying hardware, and it gives SMBs and branch offices SAN functionality and virtual server and storage scalability that they cannot get without spending a lot of dough. 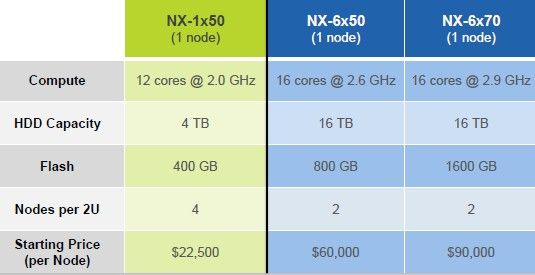 Given the relatively modest computing needs of a lot of SMBs, and the availability of the just-announced four-core "Haswell" Xeon E5 v3 processors from Intel, it would seem reasonable that at some point Nutanix may offer a Twin configuration based on single-socket nodes and having an even lower price point. But Ting is making no promises.

"Certain environments, particularly in retail store locations, are very light when it comes to compute needs," says Ting. "They want to go even smaller than we have with the NX-1050, so we are looking at other processor options."

The NX-6000 series announced this week are the storage-heavy configurations that Ting alluded to back in May. They shift from 2.5-inch disk drives to fatter 3.5-inch disks, which allows the capacity to go from 1TB to 4TB per drive. The nodes for the NX-6000 are 2U high, so only two nodes fit in the chassis. There are two models of this fat storage configuration. The NX-6050 has two eight-core Xeon E5-2670 processors running at 2.6GHz, two 400GB Intel SSDs, four 4TB drives, and 128GB (expandable to 256GB).

Ting says that Nutanix is working to get its server lineup refreshed to support the impending "Ivy Bridge-EP" Xeon E5 v2 processors, which Intel is expected to launch in the third quarter. "We won't be more than a few months behind the launch," he says, adding that Nutanix is seeing a lot of demand for machines with bigger workloads. "Going from two-socket to four-socket is a big price jump in Intel chip prices, but we are looking at it," says Ting. "We are getting pulled into beefier boxes." ®

We dunno what's more wild: This vid of Japan's probe bouncing off an asteroid to collect a sample – or that the rock was sun-burnt