Programmers and their walking sticks converge in Canada 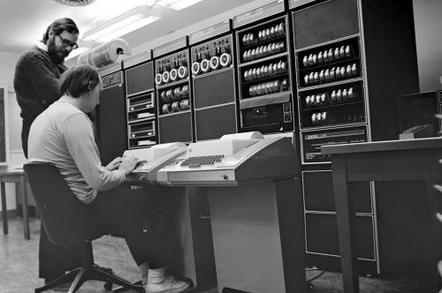 The venerable PDP-11 minicomputer is still spry to this day, powering GE nuclear power-plant robots - and will do so for another 37 years.

That's right: PDP-11 assembler coders are hard to find, but the nuclear industry is planning on keeping the 16-bit machines ticking over until 2050 – long enough for a couple of generations of programmers to come and go.

Now that you've cleaned up the coffee spills and finished laughing, take a look here, at Vintage Computer forums, where GE's Chris Issel has resorted to seek assembly programmers for the 1970s tech.

Issel is responsible for talent acquisition at GE Canada, and her post says there's a “fantastic opportunity” for a PDP-11 programmer at GE's Peterborough operation in Ontario.

“The role supports the nuclear industry who has committed to continue the use of PDP-11 until 2050”, she writes.

It seems that Ms Issel has decided that an unorthodox approach is needed to find this skill: GE had tried the more conventional approach of advertising on its recruitment site, but the ad has since been taken down. Here's a Google cache.

The GE ad – presuming it's for the same role as Ms Issel wants to fill – describes the role: “Lead the design, implementation and testing of legacy PDP-11 based control systems for robotic applications in nuclear power plants and products. Coordinate follow-on support and service of installed systems.”

Unsurprisingly, as well as designing new software and maintaining existing code, GEO also wants the lucky winner to train others.

Your humble scribe was actually taught the basics of PDP-11 in the early 1980s, which prompts Vulture South to wonder: we know there's plenty of COBOL in use, but what other undead operating systems and programming languages do our readers use? Answers in the comments. ®

HP has taken issue with my brief mention of VMS's EOL schedule – your correspondent initially started this article with "HP might have nuked OpenVMS..." following our earlier article here. This is what HP had to say in full:

"HP has committed for OpenVMS Integrity 8.4 Software to provide Standard Support (which includes OpenVMS Engineering support, including bug fixes, some new hardware support (the OpenVMS Roadmap specifically mentions 3PAR storage support), and of course telephone/chat/e-mail technical support) through at least the end of 2020. 2020 is a minimum date, which HP might extend; in any case, 24 months’ notice will be provided before the end of Standard Support, according to the support chart.

"So to say that all support will end in 2020 is a bit soon to predict, and would differ from past practice." ®