Which big rack should you splash out on at ISC’13?

Have a punt on your favourite cluster-crafting students 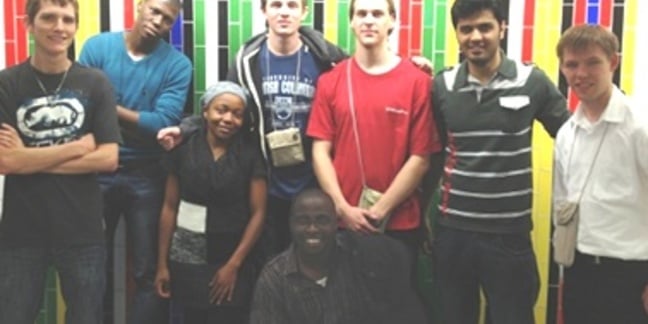 HPC blog What would you get if you combined the World Cup and March Madness with computer science and HPC? You'd have yourself a cluster-building competition for students, and that’s exactly what’s on the docket beginning 17 June.

The venue is International Supercomputing Conference 2013 (ISC'13) in Leipzig, Germany, where we’ll see eight teams of university undergrads slug it out by building clusters, and running various HPC workloads to see which team can wring the most performance out of 13 amps (3,000 watts) of juice.

Every continent (except Antarctica and Australia) is represented in this competition. Teams are traveling thousands of miles to prove that they have what it takes to make scientific apps run like a scorched cheetah. It’s an East vs. West vs. South supercomputer free-for-all that will test these students and their hardware creations in ways that can’t be simulated in a classroom.

So who is going to win? Who will take home the trophies for Highest LINPACK Score and the coveted Overall Championship? Now's your chance to step up the betting window and lay down your own (virtual) money. Clicking here will take you to a site where you can bet $1,000 in virtual currency on the team(s) you are pulling for. (If you’re hazy on what we’re talking about, here’s a quick primer)

In betting terms, how do these teams stack up? Let’s take a quick look at what the touts are saying:

Europe: Two teams are carrying the EU flag into Leipzig: the University of Edinburgh, from Scotland, and Chemnitz University of Technology, from host country Germany. (More detailed team profiles are here)

Both of these teams are new to international cluster competitions and thus don’t have a track record for us to evaluate. Edinburgh is one of the most highly ranked universities in the world and has a robust tech program. But academic rankings don’t build supercomputers - or tune applications. Chemnitz has a solid tech heritage as well, but little is known about the team and its ability to withstand competition conditions.

Outlook: Middle-of-the-pack finishers on both LINPACK and Overall Championship, although either could pull an upset.

Asia: China is sending two teams to ISC'13: Tsinghua University and Huazhong University of Science and Technology (profiles here((LINK3)). Both earned their tickets to Leipzig (and some cash too) by finishing first and second in the recently-completed Asia Student Supercomputer Challenge in Shanghai.

Tsinghua won the Overall Championship at ISC'12, and in fact has won all three of their previous bouts. Huazong’s second-place finish in Shanghai is its only experience in a sanctioned cluster competition.

Outlook: Insiders peg Tsinghua as an early favorite for both LINPACK and the Overall Championship. It's an experienced team that hasn't yet tasted defeat. Huazong is more of a mystery. Their showing in Shanghai says they have game, but can they deliver the goods when they come up against more experienced competitors? Will they be thrown by the ‘surprise’ apps they’ll see in Leipzig?

North America: Two highly experienced US teams are looking for their first Overall Championship rings in Leipzig. (There aren’t any actual rings, unfortunately.) The University of Colorado and Purdue University (profiles here) have participated in almost every cluster competition since the inaugural event in 2007.

Both schools, more than most others, have used these competitions as a foundation on which to build a more comprehensive HPC-oriented curriculum. While this hasn’t translated into competition wins for either team, they’ve seen a payoff in terms of placing students into HPC and research careers.

Outlook: The ISC'13 format with the two "secret apps" could play well to the strengths of both of these experienced and well-rounded teams. They should finish in the upper echelon when it comes to the Overall Championship. However, both will likely finish middle-of-the-pack or lower on LINPACK due to their reluctance to deploy hybrid systems.

Southern Hemispheres: The two south-of-the-equator players are the Costa Rica Institute of Technology Rainforest Eagles 2.0 and Africa’s first entry, a team representing South Africa’s CHPC (Centre for High Performance Computing)(profiles here). The Rainforest Eagles competed at SC11 in Seattle but had to use borrowed hardware, which put them at a decided disadvantage.

South Africa’s team is a question mark at this point. The team was selected via an intra-country cluster-off competition and has had some training provided by their hardware vendor partner Dell, but ISC’13 will be their debut on the big stage of international cluster competitions.

Outlook: These are wild card entries. Both teams have some experience in working together and dealing with the demands of a cluster-fest. Costa Rica will have their own hardware (provided by the HPC Advisory Council), so they’ll be in a much better position than they were in Seattle. We don’t know the extent of the training the CHPC team has received or how skilled the team is with a broad range of HPC applications. We expect both squads to make it through the competition in fine form, but they probably won’t challenge the leaders for the LINPACK or Overall awards.

Now it’s time for you to tell us who you think will win in the LINPACK and Overall Championship categories at ISC’13. We’ll publish updated odds in a future blog and compare the final odds vs the actual outcome to see if you Register readers and cluster competition aficionados can accurately predict the ISC’13 Cluster Challenge winners. ®