HP is getting to Kyoto ahead of AMD's SeaMicro biz 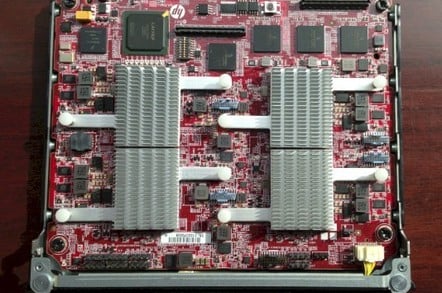 Hewlett-Packard is making no promises about when it will be delivered, but the company is showing off a multiple-node server cartridge for its "Redstone" Moonshot 1500 chassis using the "Kyoto" Opteron X processor from Advanced Micro Devices.

More precisely, Andrew Feldman, general manager of the server business unit at AMD, has one in his pocket and whipped it out to share with El Reg readers as a significant design win for the new server chip.

The display is also no doubt designed to make some noise about the four-core Opteron X, which made its debut last week, in the lull between the interesting two-core "Centerton" Atom S1200 that is currently shipping in the Moonshot 1500 chassis.

The just-announced four-core "Haswell" Xeon E3-1200 v3 processors will no doubt also make their way into Moonshot cards, and the eight-core "Avoton" Atom S chips that are expected from Intel in the second half of this year.

The Opteron X chips are going to get some intense competition, and it will be fun to see how the price/performance and cost/watt all play out when all three chips are in the field later this year.

For now, what AMD wants to focus on is getting the Opteron X chip into the HP Moonshot machines on this forthcoming server card: 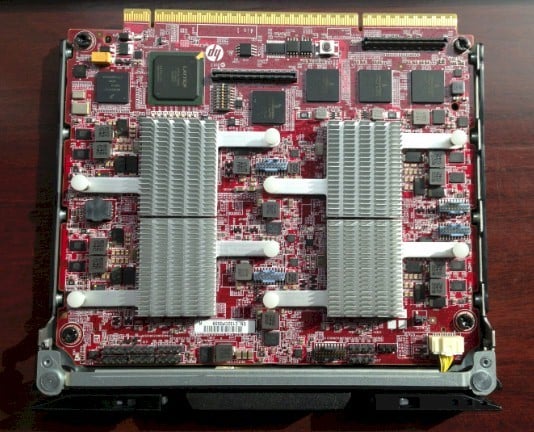 The Opteron X chip does not have SMP or NUMA electronics to span multiple sockets, so this is not a four-socket machine with sixteen cores and 128GB of main memory in a single system image. That would significantly increase the size, price, and thermals of the Opteron X chip, of course, and defeat the purpose. 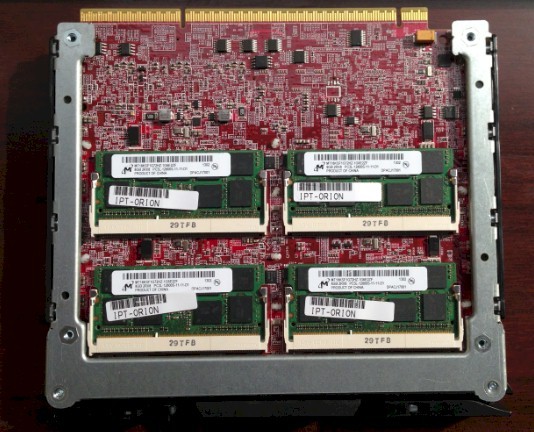 That said, it is interesting to contemplate what one might do with a bunch of these Moonshot Opteron X cards and the vSMP server-spanning hypervisor from ScaleMP. You could not only span all of the processors on a single card, but perhaps glom together multiple Moonshot cards to create a pretty hefty SMP/NUMA box.

It would be fun to experiment with such a setup to see if it makes technical and economic sense instead of a big bad Xeon E5 or E7 chip for particular workloads. ScaleMP's vSMP hypervisor, which glues together multiple server nodes into a single system image and which has traction in the HPC space, only supports Linux operating systems, so it is only applicable to about a quarter of the server market.

The other design win that AMD has with the Opteron X processors, of course, is its own SeaMicro microservers. However, AMD is pretty tight-lipped about when it will get the chip in its own box.

"We will be announcing that when we have a whole system ready," Feldman tells El Reg, and press as we might to get clarification about whether this could happen this year or not, all he would say is that it would happen sometime in the future.

It seems unlikely that AMD will emphasize the new four-core Haswell Xeon E3 chips in the SeaMicro SM15000 microservers, which came out last September, but you never know. In this server hack's briefing with Intel on the Haswell Xeon E3's announced this week, Dylan Larson, Xeon platform marketing director, said that AMD has not approached Intel to get the Xeon E3-1200 v3 parts, although we did point out that AMD could get them from Avnet or Arrow Electronics and Intel would be none the wiser.

What we can tell you is that the SeaMicro business really took off once the upstart server maker added Xeon processors to its SM10000 chassis, so customers may be looking for an upgrade to the Haswell processors from the initial Xeon-1200 v1 and v2 chips that SeaMicro and AMD have supported thus far in the microserver enclosures.

With the Moonshot 1500 chassis supporting 45 cartridges and ten of these in a non-standard rack (in terms of height, not width), using the Opteron X on the Moonshot card gives you 1,800 server nodes, each with up to 32GB of memory, in a single rack. That is fair number of server nodes for dedicated hosting or web serving.

It also means using external storage for those nodes, because there is no room for a disk drive on the card, as you can see. (The Centerton Moonshot card has one Atom S1200 chip and a disk drive as well as memory on the back.)

The SM15000 chassis from SeaMicro weighs in at 10U and offers 64 server processor cards, and you can put one Xeon E3 or one Opteron 3300 processor on each card for a total of 64 in an enclosure. Or with four per card, you can get up to 256 dual-core N570 Atom processors in the chassis.

The SeaMicro chassis has storage space that the Moonshot box does not, but has also extended the Freedom 3D torus/mesh fabric that links the server nodes to each other and to the ASIC at the heart of the box that virtualizes I/O to extend out to external disk arrays for even more storage (up to 5PB, in fact). A rack of SeaMicro SM15000 machines could, in theory, put four Opteron X chips on each server card, for a total of 1,024 unique server nodes. And if you ditched the disk drives and added more room for cards, you could push it up higher. To reach parity with Moonshot with its own Opteron X chip, SeaMicro has to rejig its chassis to get a little more than 100 cards (105, to be precise) in 10U of space. That would be an increase in 63 percent in the server board count in a 42U rack.

A new SM20000 chassis, as we suspect it might be called, could sport more server cards and less internal storage to get up to the same 1,800 node density that Moonshot is offering. That is what this server hack would do, especially after AMD has already externalized the storage with the SM15000 chassis.

SeaMicro has not supported the Centeron Atom S1200 processors on the SM15000, and if it hasn't by now, it probably never will. It will be interesting to see if customers compel it to offer the much-better Avoton Atom S chips as well as its own Opteron X processors. ®