'An aperture! Go into it' - can students think anything else? 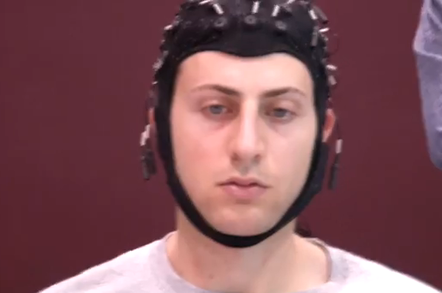 In a development with potentially huge consequences in the field of care for the disabled (also the related fields of disembodied brains in bubbling jars, cyborgs, human-machine interfaces etc) a group of students have shown that they can accurately control a small drone helicopter using only a specialised electroencephalographic hat.

Check out the vid:

"In previous work we showed that humans could control a virtual helicopter using just their thoughts. I initially intended to use a small helicopter for this real-life study; however, the quadcopter is more stable, smooth and has fewer safety concerns," enthuses engineering prof Bin He, from Minnesota uni.

Apparently no fewer than five students (three of them female) were able to successfully make the chopper do what they wanted it to. We're told that the controls work like this:

The noninvasive technique used was electroencephalography (EEG), which recorded the electrical activity of the subjects' brain through a cap fitted with 64 electrodes.

Facing away from the quadcopter, the subjects were asked to imagine using their right hand, left hand, and both hands together; this would instruct the quadcopter to turn right, left, lift, and then fall, respectively. The quadcopter was driven with a pre-set forward moving velocity and controlled through the sky with the subject's thoughts.

The subjects were positioned in front of a screen which relayed images of the quadcopter's flight through an on-board camera, allowing them to see which direction it was travelling in. Brain signals were recorded by the cap and sent to the quadcopter over WiFi.

He and his colleagues have published a paper setting out their results, including comparisons with ordinary manually-piloted quadcopters etc, in the Journal of Neural Engineering, here. The prof expects that such methods could be used to let disabled people control cybernetic limbs or other prostheses.

"Our next goal is to control robotic arms using noninvasive brain wave signals, with the eventual goal of developing brain–computer interfaces that aid patients with disabilities or neurodegenerative disorders," He says. ®

Computers wired into our minds. What could go wrong?

Hang on, didn’t Firefox have this feature years ago?

Surprise! Wireless brain implants are not secure, and can be hijacked to kill you or steal thoughts

No need to shave your head just yet, but poseur gamers might do it anyway

DARPA eggheads want brain-machine interfaces that work at the speed of soldiers' thoughts. No further comment...