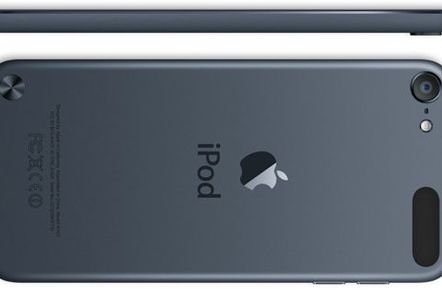 Persistent rumours that Apple is planning a cheap version of the iPhone have a little more substance today, after Apple quietly slipped a new bare-bones model of the iPod touch out the door.

The “iPod Touch 16GB” didn't even rate a press release and name and comes in just two colours: black and white.

The rear-facing iSight camera doesn't make an appearance but the foreward-facing FaceTime camera remains. The “loop” wristband is absent, helping to reduce weight from 88 grams to 86 grams. Screen size and resolution are the same at four inches and 1136-by-640 and 326 pixels per inch. In all other regards it looks, feels and behaves exactly the same as other iPod Touches.

The new device costs $US229, £199 and $AUD249, which after converting currencies, factoring in the likely ten per cent US sales tax and the UK's VAT will leave readers in The Reg's home nation a little miffed.

But enough already with the concrete details: let's ponder if this device offers any hints about a cheap iPhone.

This new device comes in just $US70 – 23 and a bit per cent - cheaper than the 32GB iPod Touch. The 16GB iPhone is sold for $US649 without a plan. A 23 per cent discount to that price would price a budget iPhone at $US499 – ten dollars more than this unlocked Galaxy S III on Amazon.

A new iPhone at a ten dollar premium over last year's model from Samsung sounds like a decent deal.

But $US499 is long way over the $US100 often cited as the price point that sparks mass smartphone adoption beyond rich western nations.

For US buyers it is also well ahead of the Nokia Lumia 620, which we've spotted for around $US230. A great many Androids also sell in the $US200 range, leaving a basic iPhone 23 per cent cheaper than the premium model well and truly more expensive than low-end smartphones.

Would punters pay a $US200 premium to own an Apple instead of an Android? Millions already have. Who's to say millions more would not find a 23 per cent discount attractive? ®