After weeks of teasing us with vague promises, Microsoft has at last revealed some concrete details of what will be included in Windows 8.1, the update formerly known as "Blue."

Describing the response to Windows 8 as "substantial," (You can say that again – Ed) Windows corporate VP Antoine Leblond wrote in a blog post on Thursday that Microsoft has listened to customers' comments and has crafted the new update accordingly.

"It's Windows 8 even better," Leblond wrote. "Not only will Windows 8.1 respond to customer feedback, but it will add new features and functionality that advance the touch experience and mobile computing's potential."

First, the stuff we already knew. As far as the oft-lamented Start button is concerned, Lablonde confirmed what we learned earlier this week, which is that although Windows 8.1 will have something that looks like a Start button, it will really be nothing more than a proxy for the hardware Windows key.

"We've improved the way you navigate to Start with the mouse by changing the Start 'tip' to be the familiar Windows logo," Lablonde wrote. "The new tip appears anytime you move the mouse to the bottom left corner of the screen, and is always visible on the taskbar when on the desktop." 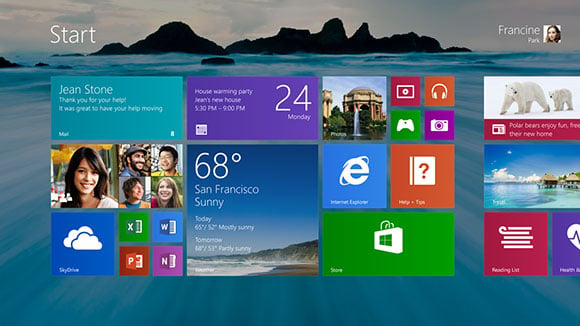 Windows 8.1 brings some interesting cosmetic changes, but don't expect a return to Windows 7

In other words, the functionality won't change, but the graphics will. Currently, when you move your mouse to the lower left corner of the screen in Windows 8, you're shown a thumbnail version of your Start screen, and clicking on it takes you there. That thumbnail will now be replaced with the new Windows logo and there will be a similar shortcut added to your taskbar, but all else will remain the same.

As for the other most-requested feature – the ability to boot directly to the desktop and avoid the Start screen altogether – Lablonde was somewhat cagier.

"There are also options to change what the corners do, and options to boot into alternate screens," he wrote. "For example, if you prefer to see the Apps view versus all the tiles, you can choose to have the Start screen go directly to Apps view."

Note that he said nothing specific about booting to the desktop, and that might be significant. Although that ability has reportedly been present in preview builds of Windows 8.1, anything could change before the final version of the update ships later this year.

But Lablonde did at least give lip service to the idea that all of the PCs and laptops we had been using with Windows 7 didn't just vanish the instant Windows 8 shipped.

"PCs today are evolving for a world of mobile computing where people interact with their devices through touch, and we designed Windows 8 for this. But we also recognize there are many non-touch devices in use today – especially in the commercial setting," he wrote. "As such we've focused on a number of improvements to ensure easier navigation for people using a mouse and keyboard."

That's still pretty vague. So what new features for Windows 8.1 is Microsoft willing to tell us about? In a nutshell, it's all about personalization, Internet Explorer 11, and apps, apps, apps.

Layering on the lipstick

Predictably, Windows 8.1 includes a number of minor cosmetic changes. For starters, you'll now be able to show a slideshow of your pictures on your PC's lock screen when you're not using it, either from your local drive or streamed from SkyDrive. As far as we can tell, however, there will not be an option to replace this slideshow with an animation of flying toasters.

You will also be able to use the camera to take pictures from the lock screen without logging in, so get ready for some interesting surprises when you get back from lunch.

As we reported earlier, you will be able to change the background of your Start screen to match your desktop wallpaper. There will also be additional preloaded backgrounds for the Start screen, including some animated ones.

The Windows 8.1 Start screen will be more customizable, offering more sizes for Live Tiles and the ability to filter apps by name, date installed, most used, or by category, to make it easier to find the ones you want.

"You want the Start screen to be about all the things you love," Lablonde wrote – as if describing Windows apps as "beautiful" wasn't bad enough.

Windows 8.1's Search charm has been rejiggered so that it shows unified search results from your apps, files, SkyDrive, actions you can take, and the web, powered (naturally) by Bing.

"It is the modern version of the command line!" Lablonde writes, clearly not understanding that the command line is preferred by those who don't want to have to use a search engine to find the actions they can take.

All of Windows 8.1's built-in apps have been updated with various improvements, but Lablonde said Microsoft is saving the specifics of those changes for a later post.

He did say that the built-in SkyDrive app has been updated to behave more like the desktop SkyDrive client, where files are synced so that they're still available when you're offline. What that means for the future of the desktop client is unclear. Windows 8.1 also allows you to save files directly to SkyDrive from your applications.

But the really big news for apps is that they're no longer limited to taking over the entire screen or being snapped to one edge of it. You can even use more than two apps at once – three, to be precise. 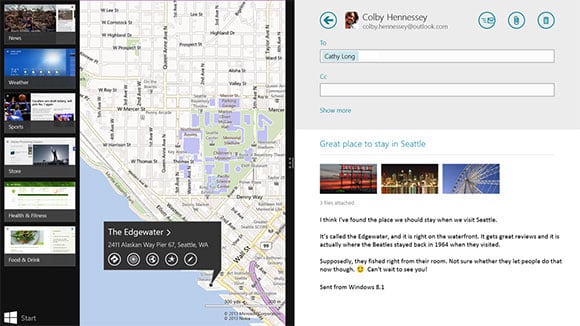 Maps and email at the same time? Say it ain't so! Windows 8.1 offers easier multitasking for modern apps

"You can resize apps to any size you want, share the screen between two apps, or have up to three apps on each screen if you have multiple displays connected, you can have different Windows Store apps running on all the displays at the same time and the Start Screen can stay open on one monitor," Lablonde wrote, adding that you can even run multiple instances of the same app on one screen.

Another definite improvement is that Windows 8.1 unifies the touch-centric PC Settings panel and the traditional Windows Control Panel, so that you can now configure your entire system from PC Settings without dropping into the desktop. Windows 8 only gave you a subset of your options in PC Settings, making it hard to know where to go to configure what.

And, finally, Windows 8.1 will ship with the next iteration of Microsoft's web browser, Internet Explorer 11. Lablonde was short on details as to what this new version will bring, but he did say that the Start screen mode will now allow you to see the URL bar all the time (though not whether it will be returned to the top of the screen, where it belongs). You'll also be able to open as many tabs as you like and sync their contents across multiple Windows 8.1 devices.

"IE11 builds on the advancements in IE10 and is the only browser that is built for touch. IE11 will offer even better touch performance, faster page load times and several other new features we think you will enjoy," Lablonde wrote.

Lablonde said to expect further blog posts elaborating on all of these and other changes in the coming weeks. As for when you can get your hands on Windows 8.1, he said a preview version will be available to all beginning on June 26, timed with the start of Microsoft's Build developer conference. ®