'Equivalent to 5 TONNES of TNT going off', says NASA 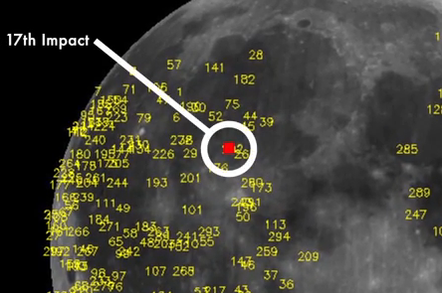 Vid Sensational news today from the Moon, as skywatchers say a huge explosion - as bright as a star, and visible from Earth with the naked eye - has been seen on the lunar surface.

"It exploded in a flash nearly 10 times as bright as anything we've ever seen before," splutters Bill Cooke, a top NASA boffin. According to NASA, the mighty blast briefly "glowed like a 4th magnitude star ... the explosion packed as much punch as 5 tons of TNT". For comparison that's twice as much explosive as one would find in a US Air Force nuclear-bunker-busting MOP superbomb.

Rather than a crashing alien spaceship, or perhaps the launch flare of one taking off, Cooke and his colleagues believe that the massive moon bomb blast has a relatively prosaic explanation: an unusually violent meteor strike. NASA calculations indicate that a meteoroid probably around 0.4 metres across and massing 40kg-odd barrelled into the lunar regolith going at around 56 thousand mph.

Despite the violence and brightness of the resulting cataclysm, nobody noticed it at the time, or if they did they didn't tell NASA. Though the space boulder struck the moon on March 17, the agency's boffins have only just realised it happened, while going through digital imagery recorded by automatic monitoring cameras attached to telescopes trained on the Moon.

Ron Suggs, analyst at the Marshall Space Flight Center, was the first to notice the impact.

"It jumped right out at me, it was so bright," he says.

NASA now plans to fly its Lunar Reconnaissance Orbiter probe craft, in orbit above the moon, over the impact site to see just what size of crater the meteoroid left. Assuming that Cooke and Suggs are right and no aliens, Tibetans, escaped WWII Nazis etc were involved, anyway.