'That's cos it replaces your current laptop+iPad combo' 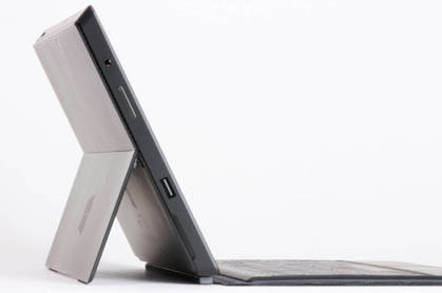 Microsoft has confirmed prices for the Surface Pro: the 128GB model will cost punters 25 per cent more than a top of the range iPad.

The laptop-cum-tablet, which Redmond says is "designed to showcase Windows 8 Pro", will land in the UK on 23 May, Microsoft revealed today.

The estimated retail price for the 64GB version is £719 and £799 for the 128GB configuration - though it would be cheaper to buy a 64GB machine and slot in a microSD card - and is available to buy only online at microsoftstore.co.uk.

The fattest Apple fondler of all - the iPad with Retina Display and 128GB of space - can be purchased for £639.

The Surface Touch Cover is expected to go on sale for around £99, billed as a "spill resistant cover with a pressure sensitive keyboard". Other accessories will also be available, the vendor said.

Rob Epstein, UK Surface lead at Microsoft, said there is "strong anticipation for the Surface Pro in the UK". The company should have learned lessons from the availability issues on launch in the US.

"The vast majority of business people use an iPad and a notebook, so it will probably be cheaper to have one Surface Pro when they upgrade devices. IT managers will look to replace iPad with Pro because the OS is easier to manage and is familiar," he said.

Canalys data shows that, since the launch of Microsoft's Surface RT in October, just 360,000 units have been shipped in Europe - thanks to the limited distribution channels Microsoft has used. Initially the hardware was only sold via Redmond's own online web shops and later through a small bunch of retailers.

The device is a full-blown Windows 8 laptop and a tablet. Tim Coulling, senior analyst at Canalys, thinks this combination could tempt consumers and IT managers, despite the hefty price tag.

"It runs on a Windows 8 operating system so there is access to legacy applications and that is why it's priced higher than the iPad. Microsoft wants customers to pay a premium for a full Windows experience," he said.

Coulling added "we all knew Pro would be expensive but routes to market will be the biggest obstacle Microsoft will face. If it's selling this only through its stores, shipments will be low".

Resellers are getting weekly calls from Microsoft account managers, who ask if they'd like to tout the Pro to customers, but as yet there is no official confirmation the portable computer will be channelled through the distribution chain.

Handing all but marketing to Ingram Micro - supply chain logistics, etc - as Apple does with the iPad could be one option that Microsoft decides to go for, or perhaps not. ®