Adobe price hike: Your money or your files, frappuccino sippers 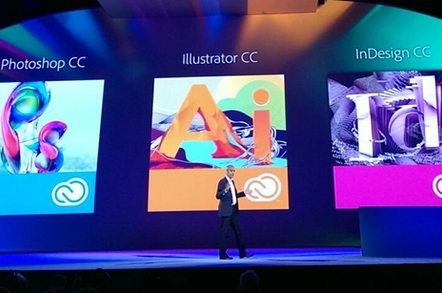 Analysis So, Adobe: can it justify shifting its Creative Suite to a contentious new licensing model?

Some say it is making life more difficult and expensive for those users who'd prefer to simply purchase the software outright, while others say it's just a decent business trying to do right by everybody.

I refer, of course, to the manner in which no one will be able to “buy” Creative Suite in the future but must subscribe, instead, to Creative Cloud. The software suite of design, video and web dev applications has long set the standard for creative professionals, and many are furious over the move to Creative Cloud.

The truth is, it is possible to argue this either way, for there's a very slightly delicate (and not entirely rational) piece of economics behind it.

You see, even if the cost to all users was exactly the same, even if Adobe's revenues (even after the cost of boxing software, or not doing so) were exactly the same, Adobe as a company should be worth more after this move. And that's what the business game is supposed to be about: increasing the return to the shareholders.

There are economic theories out there that say that this shouldn't be true: others that say that it should. As we've still not got economists with the gripping hand we can't quite settle it in theory. But stock markets do seem to like companies with more certain revenues streams than those with jumpy ones. Thus moving from an almost feast-or-famine revenue set-up to one where the cash rolls in predictably every month should indeed, ceteris paribus*, mean that Adobe will be more highly valued.

And El Reg's spy network within the company does say that the internal discussion in recent years has been about that very feast-or-famine problem. Apparently, it's rather like enterprises rolling out Windows. It's only every other upgrade that sells well. The one in-between produces a dribble or two of cash rather than great gushing waves of it. And it would certainly be easier for the company internally to convert that to a consistent subscription revenue stream.

What do you mean, I'll not be able to open my old files?

I'll not recap the points that you've all made here already... OK, well, just one or two.

Given that there is no boxed software in the future there's no point in trying to get a mate to bring it back from the US. So everyone will be stuck with those wonderfully inventive exchange rates that seem to pop up. $1 = £1, for example.

One colleague has indeed checked with Adobe and been told that if you allow your subscription to drop then you'll not actually be able to open your old files. This is going to be a huge problem at the face of the part-time design community.

Of course, for power users it's a good deal; for occasional users, not quite so much. Those who in the past would have made a fully purchased licence last for two or three years - upgrading only once every other or third opportunity - are going to end up paying substantially more. But then, of course, that was the thing that Adobe itself was trying to engineer: that it could convert that boom-and-bust of successive upgrade revenues into a consistent revenue stream.

The whole exercise is going to provide a lot of work for number-crunchers over in Blighty, though. Here are HMRC's rules on accounting for software purchases: see if you can get to grips with that.

However, what accountants are likely to do is completely ignore that series of rulings. For the Creative Suite price is just about on the exact dividing line between "sod it, this is just a current expense" and "it will be treated as such to heck, this is proper capital expenditure now we've got to write it off over several years using the correct depreciation rate"**. If you've whacked a few million into Larry Ellison's hands so that you can search your email, then HMRC will insist on the capital treatment. If the company has bought Start8 so the MD can actually use his Windows 8 box, well, perhaps the $4.99 download should be filed under the capital expenditure column... but please, who cares?

There's also the slightly tricky part of HMRC insisting that something used for more than two years is capital, but if you use it for 23 months it more-or-less ain't. The general opinion is that a subscription isn't going to be capital expenditure, that it'll be a simple operating expense.

Now, I know, you might not care about this at all, but someone, somewhere, is going to have to explain to the accounts bod that this is going to screw up his calculations of the capital pool. Some of you El Reg readers will be specifying who gets to have what piece of software and this point will come up. Or as HMRC put it:

You should not contend that software with an expected useful life of less than two years is capital. But you should not accept that a particular piece of software has such a limited life solely because updates appear at frequent intervals. The issue is whether the business concerned in fact trades up to the new versions at intervals, which are short enough to give a particular version only a transitory value to that business.

Such clear language they use.

Hey... who signed off on this?

There's also a certain element of an old salesman's trick in this. A very useful thing for most salespeople to find out before trying to close the deal is "What is the signing off limit of the person to whom you're trying to sell the kit?" Almost every company gives low level management the ability to sign off on some or another number. Might be £500, might be £2k, and then above that another signature is required to approve that budget. The thing is, many such companies haven't quite cottoned on to the repetitive nature of subscriptions. So the £50 a month might be signed off by the tea boy... simply because the system doesn't catch that that's actually £1,200 over two years, the sort of number that requires the intervention of higher powers.

As an ex-salesman there's very good eating indeed in systems like that.

From the other point of view, you as a user of the products (or a would-be user) might actually find it much easier to get a purchase order through the system for the same reasons I've outlined above. This will not be a capital cost, it'll be a simple operating cost. And as it's a subscription it may well fall into the decision-making price range of someone much lower down the totem pole. You know, someone who actually knows what it is you do for the company sort-of-thing. Good luck with that by the way.

At which point we're all really left with personal opinion to inform us on that first question. Can Adobe justify this move?

My own personal opinion is that the conversion of wildly fluctuating upgrade sales into a consistent subscription revenue stream makes this pretty much a no-brainer for Adobe. In the end, in any sort of business, cashflow is king, and this is what it is managing to do.

That Adobe might also be raising the cost of the tools for the occasional user might be true. And I'd certainly be worried about not even being able to open files if the subscription stops (Lord, I can imagine the credit card running out in those precious hours just before a presentation!). But the value to the company, and the increase in its value, from regularising that bouncing cash stream means that I don't think the software company will go back on its decision, whatever anyone says or does. ®

* This is the economist's get-out clause. It means “if everything else stays the same”. Which it never does. So we've got our excuse in there early then.

** If you must know the detail: sticking it in the capital allowances pool - where you can deduct the tax you pay on profits - and getting 18 per cent per year on a reducing-balance basis (depreciating over time as the asset declines in value).