Ammonia coolant leaking out into space 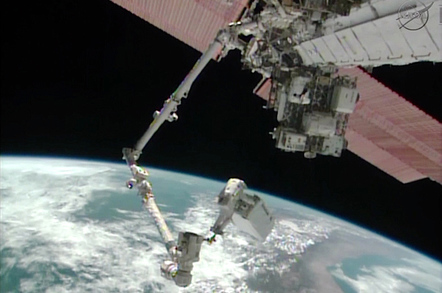 It's going to be a tense 24 hours for the crew of the International Space Station after Commander Chris Hadfield reported that the ammonia coolant used in the station's power systems appears to be leaking into space.

"There's a very steady stream of flakes or bits coming out as the truss is rotating," he said in a discussion with Mission Control. "All of us agree they are coming mainly and repeatedly enough that it looks like a point source that they were coming from."

NASA is now focusing all available cameras on the predicted source of the leak and is waiting for the ISS to move into full sunlight so they can see what's going on. The crew is currently in the station's gym to try and get a better look at the problem.

Chilled ammonia is used on the ISS to cool down the solar arrays that provide electricity for life support and other functions. There have been leaks before in the system, and one spacewalk to effect repairs last year, but this case looks to be more serious and it may be in the same area as the earlier repair.

According to further discussions with the crew, the previously fixed cooling system for one of the solar panels has seen its coolant levels fall from 16 per cent to just 4 per cent within half a day. Meanwhile, the rate of coolant loss has nearly doubled in the last few hours.

Plans to power down the solar array are in place but NASA doesn’t anticipate needing to shut it down for another 24 hours. If the leak worsens overnight (station time) the space agency has contingency plans to manage power systems from the ground without waking the ISS crew.

It's unfortunate timing. Hadfield and two other crew members are due to deorbit from the ISS on May 14 and, while NASA can't confirm that date as yet, it told Hadfield that it didn’t anticipate any delays in getting him home on time.

Hadfield reports that the situation is calm, and he took time out on his Twitter feed to congratulate the Saskatchewan Science Teachers Society (SSTS) on their 50th anniversary. He and the five other astronauts will now wait it out, and if they're really unlucky Hadfield might break out the station's guitar and sing them some of his songs. ®

Space elevators, vacuum chutes: What next for big rocket tech?

Rocketeers aim for the Moon with first-stage £600k tin-rattle

US faces 'a long downhill slide to mediocrity'