Over ONE-THIRD of PCs will have SSDs in 2017 - analyst

Hang on, will people still be buying computers then? 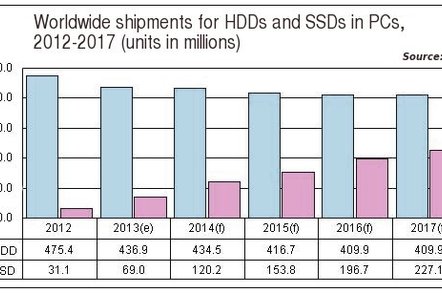 Of course, solid-state drive sales represent only a small proportion of the market currently, which means that by 2017, vendors will sell half as many SSDs as HDDs for use in PCs. 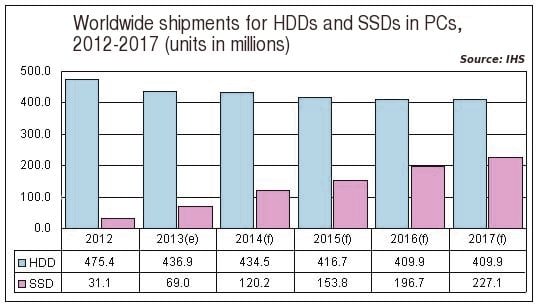 IHS storage analyst Fang Zhang said: "The HDD industry is suffering the multi-layered effects of a depressed market, resulting from a weak global economy, upgrades not being made for desktop and notebook PCs alike as replacement cycles get extended, and cannibalisation by flashier devices like mobile handsets and tablets.”

For statistical purposes IHS includes cache SSDs where flash is used alongside HDDs.

IHS's beancounters say the 2012-2017 PC unit shipment compound annual growth rate will be -2.9 per cent for HDDs and 48 per cent for SSDs. It's these sorts of numbers that are prompting disk suppliers like Seagate to throw their hats firmly into the SSD ring. ®