In space, no one can hear your laptop Blue Screen

Way above the Cloud, there's a bring-your-own-disaster brewing on the ISS 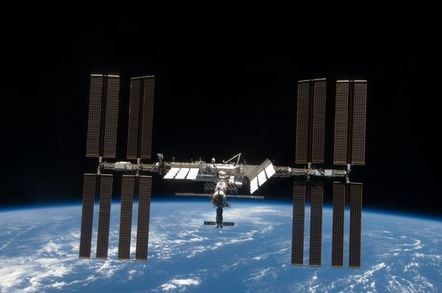 "A NASA contractor deeply involved in Space Shuttle and International Space Station (ISS) operations, decided to migrate to Linux. Chuvala oversees the developers in charge of writing and integrating software for the Station’s 'OpsLAN' – a network of laptops that provide the ISS crew with vital capabilities for day-to-day operations" - LINUX.COM.

"NASA has launched three smartphones into orbit as part of a low-budget, experimental satellite program that uses off-the-shelf components. The three Google-HTC Nexus One smartphones are circling Earth at an altitude of about 150 miles and will burn up on re-entry within the next two weeks, NASA said" - Los Angeles Times.

Yes, I am in great shape. They say you lose 1.2 per cent of bone mass per month up here, but the whitecoats figured out that last month I only lost 0.87 per cent. They have never seen anything like it. The other guys here say I hog the treadmill, but really they are just jealous. They could all use a few more hours on the SpiraFlex, and a lot less horsing around. I always remember to look after my body, just like Dad taught us. I know he would be proud.

Sorry I haven't talked with you. We have kind of hit a hiatus up here. They thought they could save comms bandwidth and patch us into the terrestrial cell phone networks via the telco satellites. Do you remember I told you about it? Every time we pass over the UK, we lose the Mission Control downlink - even on my Lumia - because our capacity is flooded out with mis-sold payment protection insurance calls, whatever they are.

Anyways. They are a-fooling around with the software on our computers again - I think it is the Windows 8 upgrade at last - so I must keep it short. Can you believe it, the designated IT expert here is one of the Ruskies? This is the sort of thinking that lost us the Shuttle. No wonder the US is cruising to Satan-land in a Soyuz.

Tell young Scott that I remember him to our Lord in my pre-sleep activities, and that he should stop fretting. If Miss Antonelli does any more of that cockermany man-to-monkey stuff in biology, he is to do what Jesus or Dad would do: report her to the authorities and sneak off to the car park during lunch and kick the headlamps out of her Nissan Humanist Hybrid.

Message from your so-called IT officer. Celebrations! Multiple thanks to your co. op.! Have now finishes upgrade of all laptops for Linux!

I hope you are finding it all most agreeable change with ISS livings. Not only do we save the money and tech support problem, we also strike blow by freeing ourselves from Microsoft yolk of Capitalist Imperialism! That just joke Mr. White!

Any probs, speak with me!

Fyodor Nikolaevich, IT in Micro G!

Afterward: You are fast learner Mr. White. I see from your 3 message you already get good hang of email-making with FireFox web with Linux!

Watch this photo! Fury in zero gravity! This Luser who expect Windows 8 and finished with the Ringtail is Raring to in his face! I'm sure he will love it as soon as it gets for lack of SharePoint, and Flash games is not working so fast, and the trash graphics drivers. (Translated from Russian by Bing)

(Translated to Russian by Google)

Further to our discussion, I attach the relevant PDFs from NASA's BYOD policy. This guy is WAY out of line interfering with my laptop.

And his stupid LibreOffice Import program has p***ed all over my documents - at least, that's what Belyakov would have me believe. Just have a look at my schedule of experiments.

What are you going to do about it?

Outline: Grow goldfish from egg. Wait until full sized. Allow it to float around in its blob of water.

Purpose: Test survivability of swim bladder-equipped vertebrates in ZG. Plus got to be good for a laugh. Reminiscent of character in popular US TV show 'Family Guy'.

Purpose: Dr Pepper is so misunderstood.

Outline: Use grabbing arm to hang empty beer can on the aerials of docked ATV. Spacewalk to a suitable observation point. Rip can to pieces with a Bushmaster semi-automatic.

Purpose: Somebody's got to do it.

Purpose: To see if it is as lame as they say. Haha!

You really are over-reacting. It's nearly all down to misunderstanding.

Ok, the planet Mars wallpaper was childish, but come on, you're bigger than that.

And we've established that Belyakov's discussion of 'Mir' is the

new Ubuntu display driver, not an attempt to claim the whole space station for Mother Russia.

Nobody is getting at you. Lighten up.

More message from Fyodor. I think problems with cell phone are found! It is to do with kind!

Fortunately I have here box of Nexus One smartphones, which are running on Open Source Android, and get the sound like a crystal without interference from pesky British personal injury compensation computer.

One thing: must return to me first your other phones, so to preventing the interference. This mean especially you too, Mr White, much though I know you love your Nokia 920. Worth it again to gay chatter once more with Mom, I am thinking!

Enough is enough. Decided to confront the so-called bear in its den. Accordingly punted my way aft to 'Star city' -  the tawdry garbage can the Russians call home. As I entered the Zvezda module, Belyakov was doing something with the vent controls and didn't notice me. But the box of Nexus smartphones was clearly visible, latched to the locker near the picture of Gagarin.

I ripped the Velcro strap, stuck the carton under my arm, and set off smartly for the Quest airlock. There were cries of alarm and pursuit behind me, but Belyakov is flabby and clumsy, and I easily outpaced him. He arrived just in time to see his precious 'Redmond-free' cell phones go spinning off into the vacuum...

Please tell the PR boys they did an absolutely A1 job. Haven't seen an NASA disaster turned into a triumph like that since they sold the movie rights to Apollo 13.

Needless to say I have knocked heads together up here in no uncertain terms. They are under no illusion about their behavior. I am confident there will be no repeats of this disgraceful incident.

Although I look forward to seeing their faces when we unship the replacement machines from the next Progress: a pair of iPhone 4s's and an iPad mini.