How did something so small and pink cause so much trouble? 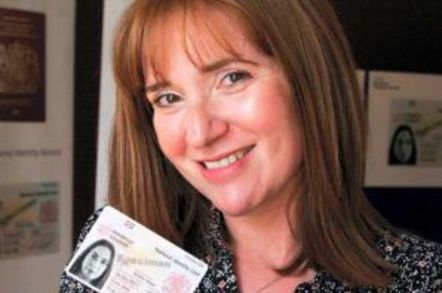 Book extract Today, we publish the next extract from SA Mathieson's book on ID cards in Britain, following on from the political wrangling over the controversial technology in the 1990s and 2000s.

All that remained before the 2010 general election was the Mancunian trial of the new UK identity card.

On 30 November 2009, Manchester Evening News columnist Angela Epstein became the first member of the public to get an identity card, although the home affairs select committee had heard that 538 advance applicants were on the database as of late November.

“I haven’t felt this good about cradling something small and pink since my daughter Sophie was born,” Angela Epstein wrote later that week.

“All right, so I’m exaggerating a bit. But honestly, when you’re the first member of the public to be issued with a brand spanking new national identity card, it’s a seminal moment.” She did add that this was something of a minority opinion, given that only 1,386 people in and around Manchester had applied so far. As one of a small number of press supporters of the project, the Home Office had let her jump the not very substantial queue.

In an inadvertent demonstration of one of the problems with making fingerprints key to the ID scheme, Ms Epstein’s enrolment nearly didn’t happen: she had burnt her index finger while roasting potatoes, and the machine couldn’t scan her fingerprint through the plaster she was wearing. However, it turned out that removing the plaster allowed the scanner to work, and she got her card later the same day. “The Tories have pledged to junk them if they win. And when I had a schmooze with Home Office minister Meg Hillier on Monday she wouldn’t say whether I’d get my 30 quid back if that happened,” Epstein wrote. (She wouldn’t.) “Slipping it into my purse and slinking off into the gloom of an icy winter afternoon, I felt like I was pocketing a piece of history.” (It was certainly heading that way.)

As part of the publicity, in mid-December Meg Hillier – who rejoiced in the title ‘identity minister’ – went to Liverpool to promote identity cards. There were only two problems with this. Firstly, the previous week had seen Liverpool City Council voting to ban identity cards from council buildings, with the support of both Lib Dem and Labour councillors. “It serves a psychological purpose. We’re one of the first places to be chosen for the roll-out, and we’re saying: ‘No. We don’t want it. Go away’,” said councillor Paula Keaveney, who proposed the motion. Secondly, Meg Hillier had left her card behind. “I’m here to promote ID cards, but I’ve forgotten mine,” headlined the Liverpool Daily Post.

Just before Christmas, Norman Eastwood from Salford tried to use his new identity card to board a P&O ferry from Hull to Rotterdam – and was told he would need his passport, which he had left at home. Meanwhile, Dutch passengers using their national identity cards were allowed to board. “We had no idea the ID card was being trialled,” a P&O spokesperson said, although it offered Eastwood a couple of free tickets and an apology.

Following this up, reporters from the Manchester Evening News posing as ID card holders asked a dozen travel companies whether they could use their cards for travel within Europe. All should have said yes, but nine, including British Airways and Eurostar, initially said that the cards could not be used instead of passports. Eight of them changed their minds when asked for an official statement, although Eurostar remained unsure, and two German airlines said they would not accept the cards until the German federal authorities had recognised them. Chris Grayling said the scheme had become “a complete farce”. The evidence is that it had been so for some time. ®

This is an extract from SA Mathieson’s book, Card declined: how Britain said no to ID cards, three times over, available in e-book for £2.99 (PDF or Kindle) or in print for £4.99. Click here for more in the series.